Ex-Jesuit governor, a man for others, helps the undocumented

Since becoming California’s governor for the third time, Jerry Brown has signed into law six bills that provide significant benefits to undocumented immigrants. 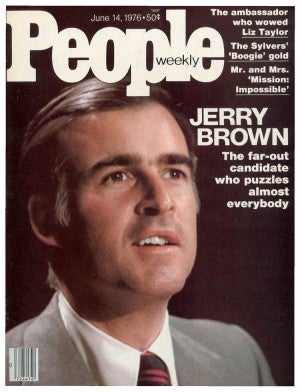 In October 2011, the California Dream Act became law, affording financial aid for undocumented immigrant students who were brought to the US before the age of 16. This was followed in October 2013 by two more laws: Assembly Bill 60, which allows undocumented immigrants to have drivers’ licenses, and by the California Trust Act, which forbids state law enforcers from detaining them for immigration hold when they are arrested for minor and non-violent crimes.

These six laws significantly benefit not only undocumented immigrants, but also everyone else. The development of as many men and women as possible to their full potentials allows for more human achievement in the sciences, arts and humanities, benefiting all of us on this planet.

While these laws were sponsored by well-meaning legislators such as Sen. Bill Lara (D) who sponsored the loan program legislation for undocumented immigrant students, without Brown’s full support it would have been very difficult if not impossible to get these passed. In so many ways, these laws provide a kinder and better world not only for undocumented immigrant beneficiaries but also for all of us.

Many are those driven by hysteria, irrational fear, racism, misinformation or hate, who constantly and unjustifiably demonize undocumented immigrants and hurl all kinds of false accusations. They fail to see that by helping to improve the lives of those who are less fortunate, their own lives are enriched. Conversely, by making others miserable, their own lives are also made more miserable. Love begets love, hate begets hate. Why is this so difficult to see?

It is an unquestionable fact that many great men and women whose talents and skills in various fields have contributed so much to a better life for all came from the ranks of undocumened immigrants.

And even those who may not be as exceptional contribute much to keep food on our table with their agricultural sweat, build houses, work in hotels and restaurants, babysit for children, care for the elderly, clean homes and offices, work for manufacturing companies and provide so many other valuable services to our society.

Studies have shown that in general, undocumented immigrants give more to the system than they take. Even the funds from Social Security deductions taken from them for which they will not benefit because of their unlawful status amount to hundreds of millions of dollars.

The best leaders are those who sincerely love the people and not those who glorify and enrich themselves in their positions of power. Governor Jerry Brown’s love for the people goes further. It stems from his love of God. He does not see undocumented immigrants as separate from other human beings, understanding that God commands him to love all.

His father, the very popular and well respected Governor Pat Brown and his mother Bernice Layne, the daughter of a San Francisco police captain, both staunch Catholics, raised Jerry and his four sisters as practicing Catholics and sent them to Catholic schools. Jerry went to St. Ignatius High School in San Francisco, a respected Jesuit institution.

He went through the usual basic Jesuit spiritual formation of students, which includes religion classes, regular masses, Communion, silent retreats, regular masses, and discussions on Ignatian principles of what a person ought to do with his life. Being humble and “a man for others” for the greater glory of God is a core Jesuit belief and principle.

After high school, he went to Santa Clara University, another Jesuit School, and spent a year there. In search for the deeper meaning of life, he entered the Sacred Heart Novitiate seminary to become a Jesuit priest. As an scholastic, he took the initial vows of poverty, obedience and chastity. The most intellectual of all the orders, Jesuits are mandated to take heavy philosophy and theology courses.

Three years later and after much soul searching, Brown decided that being a priest was not his vocation. He would love and serve God as a public servant. After getting his Bachelor of Arts degree from the University of California in Berkeley, he went to Yale Law School, then entered politics.

After being the top vote getter in the Los Angeles Community College Board of Trustees in the 1969 elections, the charismatic young man ran for the position of Secretary of State in 1971 and won. He went after some of the biggest corporations for electoral law violations, something politicians are not inclined to do as they would lose corporate financial support. Then at 36, in 1975, he was elected governor of California, one of the youngest ever.

He held this position for two terms. He did what he sincerely thought was good for the people. He became known as a staunch environmentalist, fought for the rights of minorities, was against the death penalty and did an excellent job with the economy as a fiscal conservative. Successful as governor and having gained national popularity, he was constantly touted as a strong Democratic Party candidate for president. The lack of corporate funding hurt his chances for nomination.

As governor, he chose to ignore the perks of the office. He did not live in the Governor’s Mansion but rented a simple apartment. Unlike previous governors, he opted not to ride a chauffeured limousine, but instead walked to his office and drove an ordinary Plymouth sedan. Incumbent Pope Francis, also a Jesuit, has likewise chosen to live not in the papal palace but in a simple apartment. He also avoids the perks and privileges of his office. Governor Jerry Brown was ahead of him in refusing to live like a king.

After his second term as Governor in 1983, Brown did not hold any public office for a long time but continued with his search for a meaningful life. He went to Japan to study Zen Buddhism and also spent some time with Mother Teresa in Calcutta, India, ministering to sick and dying poor people.

In 1999, he decided to continue his service to God and humanity as a politician and did an unthinkable thing. He ran for Mayor of the City of Oakland. Why Oakland? Oakland is predominantly a black community plagued with widespread poverty and a reputation as one of the most violent cities in the US. Could a white candidate win as mayor? The black community sensed that Brown, a former governor, was out there to really do good and not out of blind ambition. They elected him to two terms, from 1999 to 2007.

Brown did much to revitalize Oakland with his connections and experience. He was able to bring in over a billion dollars in investments, rehabilitated blighted districts, tried his best to provide better educational opportunities for young people and reduced the crime rate by 13 percent Brown left the city a better place to live in.

With his good record as a true public servant, Brown ran for Attorney General in 2007 and won with one of the widest margins ever in state races. As Attorney general, among other things, he went against the predatory lending practices of financial institutions, winning class settlements for the victims.

In 2011, now 72 years old, he ran for a third time for governor against moneyed Meg Whitman, former EBay president. Endorsed by practically all the major California newspapers, Brown won by an overwhelmingly wide 14 percent margin. He became the oldest elected Governor in California history.

Jerry Brown is a rare politician. He behaves more like a philosopher than a politician. To him, unlike most politicians, politics is just a means to a higher end and not an end in itself. Before he is a politician or everything else, he is a man committed to God and fellowmen. He simply does courageously what he sincerely believes to be the right and good thing to do after much thought and indifference to the results, victorious or not. It’s a way of life and thinking acquired by those who spend much time in solitude and prayer.

The good work that he has done will bear much fruit in the lives of others and the generations to come long after he is gone. If we had more politicians like him, we would have a much better world. Governor Jerry Brown, truly a man for others.

Note: Atty. Ted Laguatan is one of only 29 lawyers officially certified continously for 24 years now as an expert in immigration law by the California State Bar. As a journalist, he recently won the 2014 award in the Plaridel Awards for Excellence in Filipino American Journalism in the Best Commentary and Editorial category given by the Philippine American Press Club.