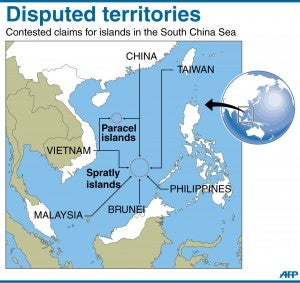 BEIJING — Beijing has completed a runway for military aircraft on a South China Sea island also claimed by Vietnam, state-run media reported, as it asserts its territorial claims in the area.

The Paracels are also claimed by Vietnam and Taiwan, and tensions between Beijing and Hanoi rose this year over Chinese construction and oil exploration there.

The runway is Beijing’s latest physical assertion of control in the area, two years after it declared a city named Sansha centered on Woody Island — known as Yongxing in Chinese — to administer vast swathes of the South China Sea.

Vital shipping routes run through the waters and they are believed to sit atop vast oil and gas deposits. Parts of the sea are also claimed by the Philippines, Vietnam, Malaysia, Brunei and Taiwan.

Xinhua’s report gave few details but said the runway was 2,000 meters long, and indicated it would have military uses.

“With the completion and continued improvements to the runway on Yongxing, military aircraft can be based in the Paracels, and greatly improve Chinese defense capabilities in the Xisha and Nansha islands,” Xinhua said, using the Chinese names for the Paracels and Spratlys, a separate island chain.

Pictures posted with the report showed part of the airstrip surrounded by construction cranes and clear blue water.

China previously built a school on Woody Island for 40 children whose parents work there, state-run media said in June.

Beijing placed an oil rig in disputed waters near the Paracel islands in May, sparking deadly anti-Chinese riots in Vietnam.

Sansha hosts a military garrison and this year began setting up a patrol system intended in part to “safeguard national sovereign rights.” Expanded infrastructure and tourism are in the works, domestic media have reported.