MANILA, Philippines – A fleet of three Chinese ships, one of which has an “advanced weapons system,” has completed patrols and landing exercises in the Paracel Islands in the South China Sea Wednesday, Chinese state media reported. 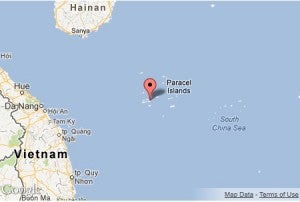 “The flotilla undertook a ‘three-dimensional’ patrol of several islets, using surface vessels, hovercraft and shipboard helicopters. Marines with the flotilla conducted a 20-minute landing training on Wednesday,” it said.

The ship Changbaishan was described as China’s largest landing ship and has an “advanced weapon system.”

The fleet also has three helicopters and one company of Marines onboard, the report said.

Paracel Islands is a group of island in the South China Sea that is the subject of a dispute between China and Vietnam. China calls it Xisha Islands while Vietnam calls it Hoang Sa Islands.

In 1974, a military engagement between Chinese and Vietnamese troops left at least 50 from the Vietnamese side and 18 from the Chinese side dead.

One Vietnamese ship was sunk while a total of seven ships were damaged.

China won the battle and have controlled and occupied Paracel Islands ever since. Sansha city was established July 2012 to administer over the

The islands are covered under the recently implemented fisheries regulations of Hainan province that require foreign ships to ask for permission from authorities before they can conduct fishing or other marine activities.

The Hainan fisheries regulation and the reported patrols of Chinese ships have both been protested by the Philippines.

“Under international law including the United Nations Convention on the Law of the Sea China’s Exclusive Economic Zone (EEZ) cannot extend beyond 200 nautical miles measured from the Chinese mainland and Hainan Island,” DFA spokesman Raul Hernandez said in a previous statement.

“Coastal states have sovereign rights over their EEZ. Also under international law there is a high seas area in the South China Sea over which no state can exercise sovereignty,” he said.

Malaysia, Brunei, and Taiwan also have territorial claims in the resource-rich region believed to have huge oil deposits.