Tagalog 3rd most widely spoken foreign language in US homes—study 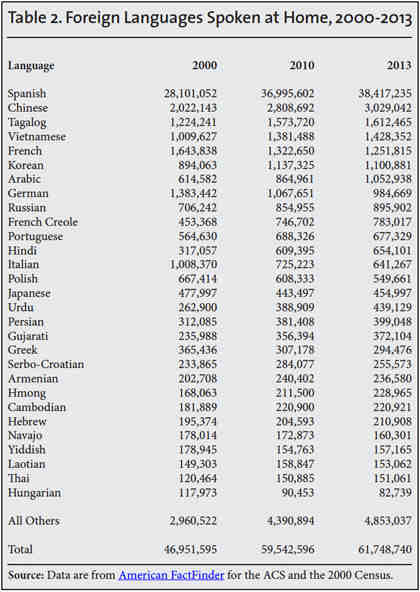 MANILA, Philippines – A study in the US has found that Tagalog is the third most widely spoken foreign language in households, following Spanish and Chinese.

The 2013 American Community Survey (ACS) conducted by the US Census Bureau found that there were approximately 1.6 million speakers of Filipino, putting it third behind Spanish (38.4 million) and Chinese (3 million).

The other languages after Tagalog were Vietnamese (1.4 million), French (1.3 million), and Korean and Arabic (1.1 million each).

The study defined Tagalog as “the national language of the Philippines.”

The Center for Immigration Studies (CIS) noted that the number of people speaking a foreign language in their home has reached an all-time high of 61.8 million, higher by 2.2 million since 2010.

“The largest increases from 2010 to 2013 were for speakers of Spanish, Chinese, and Arabic. One in five U.S. residents now speaks a foreign language at home,” Steven Camarota, Director of Research and Karen Zeigler, demographer, of CIS, said in their article here published on October 2014.

CIS also noted that the highest percentage of foreign-language speakers are in California with 45 percent, followed by New Mexico with 36 percent and Texas with 35 percent.

In the states of New Jersey, Nevada, and New York, 30 percent of the population spoke a foreign language followed by Florida and Arizona who had 27 percent.

According to December 2012 figures of the Commission on Filipinos Overseas (CFO), there are nearly 3.5 million Filipinos in the US.

Majority of them, around 3.1 million are permanent residents while those with temporary work contracts number around 126,000 and those with irregular or undocumented status are 271,000.

The US is the foreign country with the most number of Filipinos followed by Saudi Arabia with 1.2 million Filipinos and Canada with 852,000.

70 Filipinos get $1M for speaking Tagalog