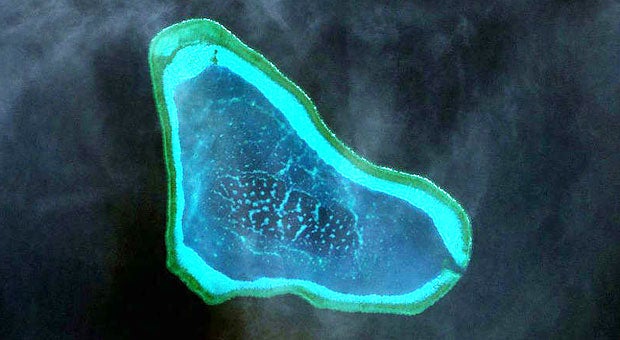 Jay Batongbacal, Director of the University of the Philippines Institute for Maritime Affairs & Law of the Sea, laid out the history of Scarborough shoal, one of the many disputed maritime features in the South China Sea, from the era of ancient Chinese dynasties to the modern times to find out who really has sovereignty over it.

“China argues that it is entitled to Bajo de Masinloc on the ground that it first discovered the island, gave its name and incorporated it into its territory, and had always exercised jurisdiction over it,” Batongbacal said during a lecture in De La Salle University.

“A serious examination of these grounds, however, bears out severe internal inconsistencies. Examination of the evidence shows the basis to be largely published fiction,” he said.

Below are some of the important points he raised. A full copy of the lecture can be read here.

1) [FACT] The Philippines, under the Spanish colonial administration, was already exercising sovereignty over Scarborough shoal by end of the 18th century.

Scarborough Shoal got its name from a British cargo ship that was grounded there on September 12, 1784—the HMS Scarborough. Before the incident, the exact location and size of what was then called Bajo de Masinloc or Panacot shoal was not clear.

In 1792, a five-year global scientific exploration from Spain known as the Malaspina Expedition after Commander Alessandro Malaspina, was able to accurately chart the location and size of Scarborough. After its location was properly charted, the Spanish government in Manila ordered a detailed survey of the shoal by sending the frigate Santa Lucia under command of Captain Francisco Riquelme in 1800. 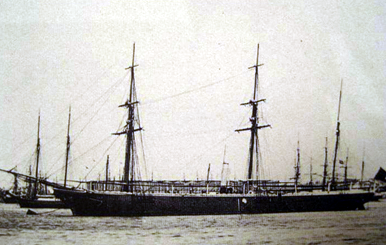 The Santa Lucia was among the first steam-powered vessels that Spain introduced into the Philippine Islands to embark on its campaign against the Sultan of Sulu and to suppress the Moro slave-raiding pirate bands that roamed Philippine waters.

A second detailed survey of Scarborough was conducted on March 13-18, 1866 by the British ship HMS Swallow, led by Master Commander Edward Wilds, which came from Hong Kong and was headed back to England.

“That Spain began exercising jurisdiction at this time is very important. The end of the century saw the transfer of the Philippines to the United States (US) through two treaties of cession,” Batongbacal said.

“While the Treaty of Paris of 1898 described the Philippine Islands as being comprised of all the islands within an irregular polygon, Spain also had sovereignty and jurisdiction over islands and places outside of the lines of that polygon. These islands and places were clarified to have also been transferred to the US under the terms of the Treaty of Washington of 1900,” he said.

2) [FACT] Philippine sovereignty over Scarborough shoal continued under the US colonial government.

A Swedish cargo steam ship, the SS Nippon, headed for Hong Kong from Manila was wrecked on Scarborough shoal due to a typhoon in 1913. Philippine maritime authorities, under the American colonial government, exercised jurisdiction over the shoal when they rescued the crew, salvaged the cargo, and conducted an investigation into the incident. 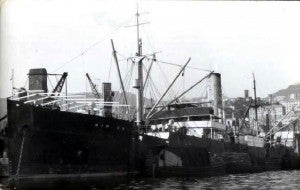 The SS Nippon, a cargo ship owned by the Swedish East Asiatic Co., which was shipwrecked on Scarborough Shoal in 1913, and became the subject of a civil case that was litigated all the way up to the Supreme Court of the Philippines.

The SS Nippon’s cargo became the subject of a civil case between the ship owners and salvors that went all the way up to the Supreme Court which discussed the details of the incident elicited from ship-owners, cargo owners, salvors, and insurance companies.

“The facts narrated, as well as the case itself, demonstrates the free and absolute exercise of governmental powers by the Philippines, as well as the application of Philippine law to activities taking place on the shoal,” Batongbacal said.

The US Commonwealth Government, in 1937, considered the shoal as a part of the Philippines after considerable research if there were other claimants.

“All throughout the Commonwealth Period, the Philippine Government had always considered Scarborough Shoal under its exclusive sphere of influence, marking it prominently in maps of the Commonwealth and continuously exercising particularly maritime jurisdiction over the shoal,” Batongbacal said.

3) [FACT] Scarborough shoal continued to be under sovereign rule of the Philippines even after it had gained full independence from the US.

The Philippine Coast and Geodetic Survey conducted a four-day mapping survey of Scarborough shoal led by Lieutenant Commander Antonio Ventura in 1961. A hut with a tide and current station was also installed on the biggest rock, Batongbacal said.

Another ship, a French vessel, was wrecked on Scarborough in 1963 and the crew was rescued by a commercial vessel and a US Navy ship.

That same year, the Philippine Navy found and destroyed a smuggler’s outpost on the shoal which was being used to bring contraband into the Philippines.

“An actual photograph of the facility was published in the newspapers. The Philippine Navy sent ships to bombard the wharf twice in the same month,” Batongbacal said.

“No other government action can express sovereignty so completely and convincingly than this enforced destruction of these illegal facilities,” he said.

Following the anti-smuggler operation, the Philippine government declared a 20-mile radius around the shoal as a US Naval Operating Area turning it into a target and bombing range for the Philippine and US Navy.

Throughout the 1970s and 1980s, the Philippines warned all international ships passing near Scarborough shoal of live fire exercises and missile firing exercises by the US Navy operating from Subic Bay.

“All these exercises of sovereignty were uninterrupted and conducted peacefully and openly, without protest from any country including China, all throughout this time,” Batongbacal said.

4) [FICTION] China’s claim of first discovery of Scarborough shoal under the Yuan Dynasty in the 13th century.

China claims it has first discovered Scarborough in the 13th century under the Yuan Dynasty. The Yuan Dynasty however, was established by Kublai Khan of the Mongol Empire which had conquered China. 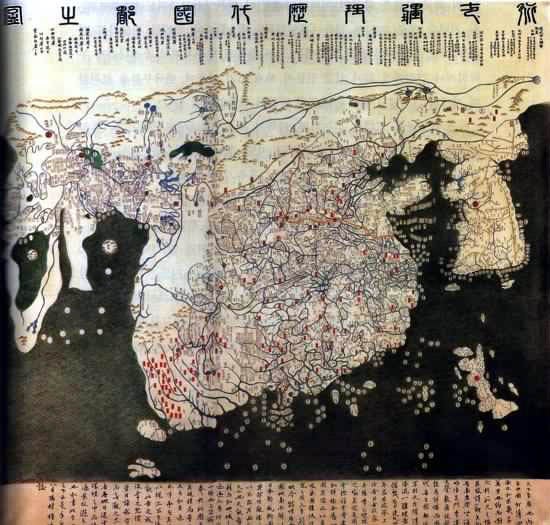 The “Map of the Entire Empire and Frontier Countries” drawn in 1402 based on Yuan Dynasty maps. The Philippines appears as a small collection of spots in the lower right corner, west of the large patch that represents Japan.

“If Bajo de Masinloc was indeed acquired by virtue of discovery, then such discovery could only be in the name of the sovereign, the Mongol Empire. Perhaps it should therefore be claimed by the remnant of the Mongol Empire, which is Mongolia, not China,” Batongbacal said.

The name “Huangyan Island,” or even its existence, never appeared in any of China’s ancient maps meaning China did not know the location, size, or shape of Scarborough shoal during that time.

“Chinese cartographers did not give the Philippines much importance, as compared with Japan, Taiwan, and Hainan. China at the time clearly did not have full and accurate knowledge of even the largest islands of our archipelago,” Batongbacal said.

“If it could not even determine the location, size, or shape of Luzon, then much less could it identify the infinitesimal rocks and reef of Bajo de Masinloc. China could not possibly claim discovery in this period, since information from the period itself is non-committal,” he said.

5) [FACT] China was fully aware that the Philippines was inhabited by seafaring people and even feared them.

Under the Tang dynasty some 700 years before the Yuan, Chinese annals wrote of slave-raids conducted by Visayans going as far north as Fujian province in mainland China.

“As early as the 7th and 10th century, the ancestors of the Filipinos had established contact with China under the Tang Dynasty 700 years before the Yuan. Thus China knew very well that the islands of the Philippines were inhabited by coastal seafaring peoples,” Batongbacal said.

“Chinese annals such as the ‘Chu Fan Chi’ of Chau Ju Kuo even [spoke] in fear of the slave-raiding expeditions of the Visayans, reaching as far north as the coast of Fujian Province. Thus, it was Philippine ancestors, not Chinese, who were the masters of the Southeast Asian seas,” he said.

6) [FICTION] China claims to be the first to name Scarborough shoal as “Huangyan Island” based on ancient maps.

China claims that it has named the shoal as “Huangyan Island” as early as 1983 in a map that then showed 11-dashed lines around the South China Sea.

“The original map (containing 11 dashed lines), gave the reef the Sinicized name of Scarborough. Thus, the very first name given for a place discovered in ancient times was the Chinese version of an English name given by English cartographers,” Batongbacal said.

“This is stark evidence that as late as 1947, China did not even know of the shoal, and only became aware of it from British Admiralty charts,” he said.

China only called the shoal as “Huangyan Island” after it conducted a hydrographic survey around 1983 without permission from the Philippines.

At one point, the shoal was named Minzhu Reef and was mistakenly grouped as part of the Spratly Islands that was as far as 260 nautical miles South.

“For China, “Huangyan Island” only came into existence in 1983, and it was nothing more than a pinpoint on a map as far as its government was concerned,” Batongbacal said.

“The only time it attempted to exercise any kind of jurisdiction over Bajo de Masinloc was in 1994, when it issued a permit to an amateur radio operator to set up an amateur radio station on the shoal, igniting the present day dispute over it,” he said.

Read Next
PNP files case vs 2 Japanese nationals over P2M rip-off
EDITORS' PICK
Connect to PH’s fastest network with new Signature Plan Lite at only P599 per month
Duterte warns of possible lockdown if ‘more aggressive’ Delta variant spreads
Duterte: When I said I will fight drugs in 6 months, I thought it was like in Davao
Harnessing technology for quality education
Tips for a cheerful life
Hidilyn Diaz wins weightlifting gold in Tokyo Olympics
MOST READ
Hidilyn Diaz wins weightlifting gold in Tokyo Olympics
Go to war with China over West PH Sea? It will be a ‘massacre’, says Duterte
Hidilyn shoots not only for gold but also for permanent place in PH sports history
Duterte acclaims Sotto: ‘He can become a good vice president’
Don't miss out on the latest news and information.