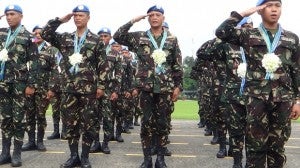 MANILA, Philippines—From the Chief Executive to the Chief of Staff, this time it’s the Army Chief who would give them the recognition.

After paying a visit to President Benigno Aquino III in Malacañang and General Gregorio Pio Catapang, Armed Forces of the Philippines Chief of Staff, and Defense Secretary Voltaire Gazmin in Camp Aguinaldo, the 7th Philippine Contingent to the Golan Heights returned to their major service, the Philippine Army, in Fort Bonifacio.

Lieutenant General Hernando Iriberri, Commanding General Philippine Army, on Thursday awarded the 360 men, all of whom are from the Philippine Army, in attendance with the “Sagisag ng Ulirang Kawal” medal.

Lieutenant Colonel Noel Detoyato, Philippine Army Spokesman, said the medal was to honor the United Nations peacekeepers in Golan Heights who have served both the UN and the Philippines in their 10-month tour of duty in the disputed area.

Syria and Israel both lay claim to Golan Heights.

“The ‘Sagisag ng Ulirang Kawal’ is a medal given to soldiers for extraordinary accomplishments in the field related to peace building and community services,” Detoyato said.

Leading the Peacekeepers in their recognition at the Army General Headquarters in Taguig was Colonel Ezra Enriquez, 7th PCGH Commander.

Enriquez, who was also Chief of Staff of the United Nations Disengagement Observer Force, defied the orders of Lieutenant General Iqbal Singh Singha, Undof Force Commander, to lay down their arms for the safe return of the Fijian Peacekeepers and went on with the “Greatest Escape” that Captain Nilo Ramones and his men in Position 68 initiated.