‘Yellow’ is color of protest in Hong Kong 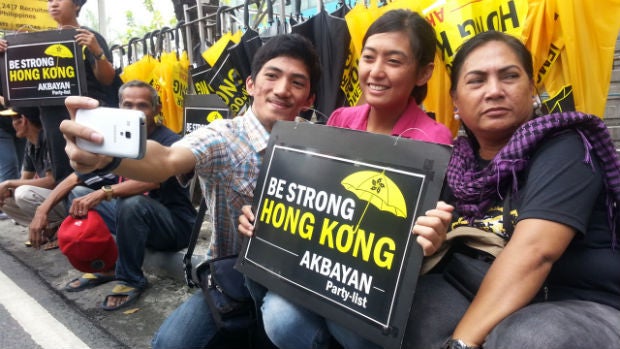 Members of Akbayan partylist group protest in front of the Chinese Consular Office in Makati with yellow and black umbrellas to express their solidarity with the pro-democracy protesters in Hong Kong. MATIKAS SANTOS/INQUIRER.net

MANILA, Philippines – Twenty-nine years after the Philippines staged a peaceful “people power revolution” to bring down a dictatorship, similar protests have been held around the world since.

The latest to be hit by the “yellow bug” is Hong Kong where anti-China protesters have posted images of yellow ribbons, the symbol of the Filipinos’ four-day bloodless uprising in February 1986, on Facebook, pinned them on shirts or tied them around street posts and barricades.

“I think the color yellow is so identified with the Philippine 1986 revolution, maybe they were advised by some of the Filipinos there that yellow might be a good [color to symbolize their movement,” said Akbayan Representative Walden Bello who led a rally Thursday in front of the Chinese Consular Office in Makati.

The late Corazon “Cory” Aquino led the peaceful revolt that ended the 20-year rule of then President Ferdinand Marcos and catapulted her to the presidency. Yellow was Aquino’s color inspired by the song “Tie A Yellow Ribbon”, which at that time was being played for the homecoming of husband and then Senator Benigno Aquino Jr., Marcos’ arch nemesis, from the US.

Following the senator’s assassination on the tarmac of the former Manila International Airport on Aug. 21, 1983, Mrs. Aquino became the symbol of the resistance until Marcos’ ouster.

Aside from the yellow ribbons, yellow and black umbrellas are also being carried by Hong Kong protesters for defense against tear gas and pepper spray that authorities may use to disperse them. The protesters have also used these umbrellas as protection from the rain and the sun as they occupied major highways near government buildings — hence, the “Umbrella Revolution”.

The protests stemmed from China’s decision to choose the candidates that can run for Chief Executive of Hong Kong Special Administrative Region in the 2017 elections.

There are more than 195,000 Filipinos in Hong Kong according to December 2012 figures of the Commission on Filipinos Overseas, majority of them, around 176,000, are temporary status while there are 13,000 permanent and 5,000 irregular Filipinos.

The Department of Foreign Affairs (DFA) has advised Filipinos there to refrain from joining the protests or going to areas where there are demonstrations for their safety.