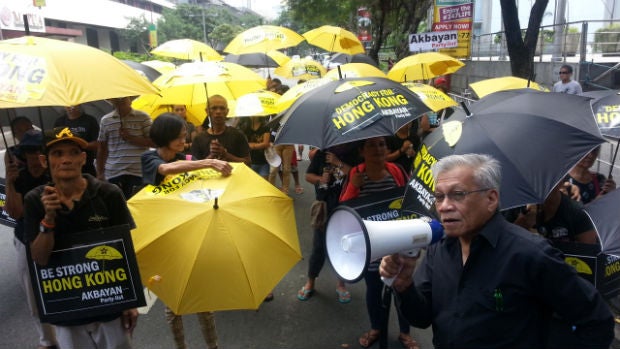 The demonstrators, through their chanting, urged Hong Kong to “be strong” and also called for “peace now.”

They also called on Filipinos to post “selfies” showing them carrying umbrellas as a sign of support for the Hong Kong protesters’ demands for universal suffrage and other electoral reforms. 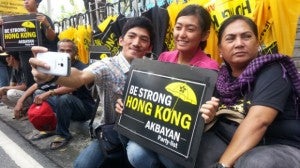 Members of Akbayan Partylist group take selfies during a rally Thursday in front of the Chinese Consulate Office to express their support for the Hong Kong pro-democracy protests. MATIKAS SANTOS/INQUIRER.net

“We express our utmost solidarity to the Hong Kong citizen’s struggle to deepen their democracy, chart their own destiny, and move away from the Beijing-based Chinese communist government’s authoritarian rule,” Akbayan Representative Walden Bello said during the rally.

“The struggle for democracy will always be a just struggle. It is an inherent right of all. We Filipinos are not unfamiliar to such a struggle having been subjected to a brutal dictatorship,” he said.

Thousands of Hong Kong nationals have taken to the streets, shutting down major highways as well as subways near government offices.

Meanwhile, former Interior and Local Government Secretary Raffy Alunan, representing the West Philippine Sea Coalition, said they monitored information from citizens on the ground about Chinese military troops preparing to crack down on the protesters.

“We are appealing to China to not break up the protest by force. There should be a peaceful solution,” Bello said.

Tens of thousands of Filipinos work as domestic helpers in Hong Kong, and are a major source of foreign currency for the Philippines. With a report from The Associated Press