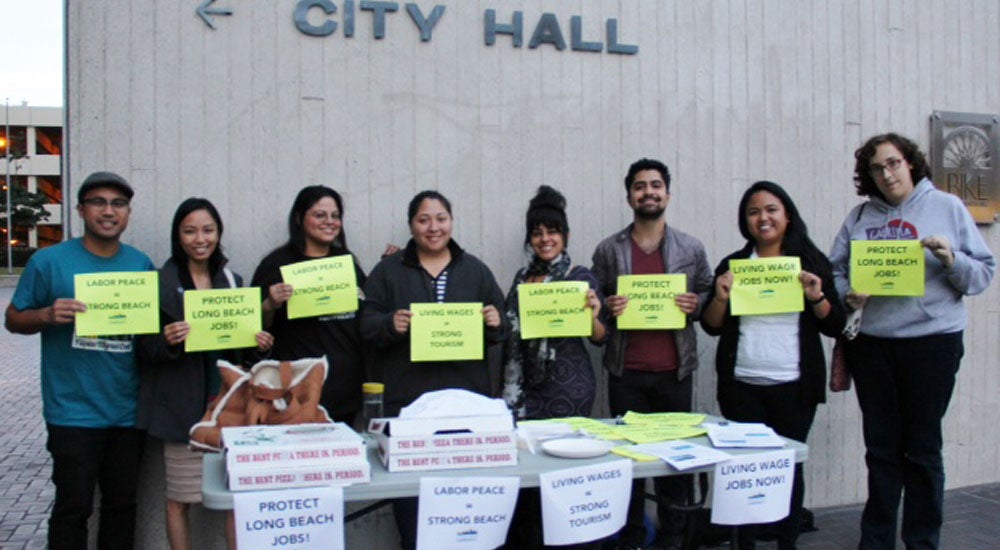 LOS ANGELES — Workers at big hotels in this city will now receive one of the highest minimum wages in the country, after the Los Angeles City Council voted on Wednesday, September 24 to impose a higher minimum wage of at least $15.37 an hour.

The 12 to 3 council vote was a huge victory for the coalition that included labor groups, over a dozen neighborhood councils and the American Civil Liberties Union of Southern California.

Despite warnings that the new wage measure might trigger job losses at many hotels across the county, council handed a victory to the triumphant coalition.

Councilman Mitch O’Farrell publicly announced, “We need a wage policy that truly helps our workforce and also explores the larger issues of affordable housing, economic development, and middle class jobs while providing relief for our small businesses in the City of Los Angeles.”

“As we prepare to discuss raising the minimum wage in all business sectors,” he added, “let’s enlarge this conversation across the whole city. Let’s have a discussion here in the council chamber, with the mayor, and with our business community and chambers of commerce.”

The vote serves as a warm-up for an expected heated debate over Mayor Eric Garcetti’s sweeping new wage proposal throughout LA County. Garcetti wants to gradually raise LA’s overall minimum wage, from $9 to $13.25 per hour by 2017.

Mayor Garcetti has already promised to sign the new hotel wage measure, but since the vote was not unanimous, the ordinance will require a second procedural vote during the next week.

The wage boost will go into effect starting in July for hotels with at least 300 rooms, and a year later to hotels with at least 150 rooms. The new measure will cover at least 40 hotels and, depending on hotel analysis and financial status, anywhere from 5,300 to 13,500 employees.

Maria Elena Durazo, head of the Los Angeles County Federation of Labor, which championed the new hotel wage measure, said that her group had “no position yet on the specifics” of Mayor Garcetti’s new plan. “Our position is that we need to explicitly get to $15 an hour as soon as possible,” she said.

“Because of the size and prominence of the hotel industry here in Los Angeles, I do believe that this will have national reverberations,” Wong said.

The decision would help put families out of poverty and keep banquet servers, cooks, housekeepers, maids, valets, bellhops and others from having to find a second job.

“It is not okay for families working in this thriving industry to not see their children before they go to bed,” said San Fernando Valley Councilwoman Nury Martinez.

Opponents of the wage hike said that the council had ignored several critical reports, which pointed out how an increase would harm the hospitality industry.

The vote is also a significant move towards increasing wages in the private sector since 2007, when lawmakers hiked the base pay of employees at 12 different hotels near LAX. While that move increased hotel workers’ incomes, it also led to a serious reduction of hospitality jobs near LAX.

Employment at hotels in LA County grew about 10 percent during the six-year period that followed passage of the higher LAX hotel wage, but the number of jobs at said airport hotels also dropped 10 percent, according to Christopher Thornberg, a founding partner of Beacon Economics, which produced one of the council’s study reports.

Without the wage boost, “there’d be 400 more people employed by the hotels in the airport area,” Thornberg said.

Other opponents of the measure say that the new ordinance is more about expanding UNITE HERE Local 11, a hotel employee union, than actually improving wages. Hotels that have a unionized workforce can be exempted from paying the $15.37 hourly wage, if workers agree in their contract to “relinquish that opportunity,” according to the Los Angeles Times.

Business groups have also threatened to sue the new plan, saying that it appears to violate the state and federal equal protection clause and unfairly targets one industry.

However, lawmakers have said that it is sensible for bigger hotels to pay their workers more, since the city of Los Angeles has made “significant financial investments” to help the hospitality industry.

There are free tourist attractions available, and the ordinance will also help build “the public transportation system that carries visitors around the city, including to and from hotels.”

“I am not naïve to the fact that there will be trade offs, including the possibility of some job loss,” said Councilman O’Farrell, who backed the wage hike measure because it would significantly help hotel workers in his 13th Council District.

“However, this will help lift many out of poverty. My heart voted with the hotel workers, most of them women, who are struggling to balance a job and family just to afford to pay rent. At the end of the day, between the intellect and the heart, the heart wins out.”