2 AFP battalions to secure the Pope 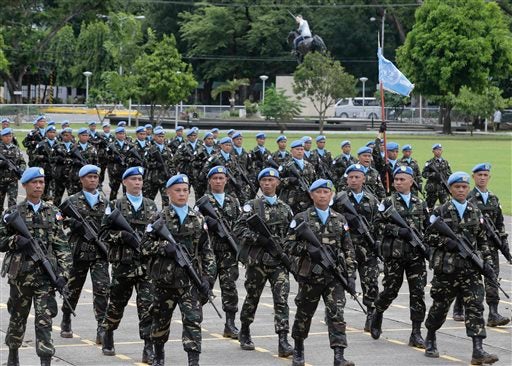 MANILA, Philippines–The Philippines has assigned a thousand-strong force that includes its United Nations peacekeepers to guard Pope Francis when he visits the country next January, the military said on Sunday.

The papal security force will include 328 soldiers from the 7th Philippine Contingent to the Golan Heights withdrawn from the UN-administered ceasefire line between Israel and Syria after the unit, defying an order to surrender, fought off an attack by Syrian rebels last month.

“We believe that their exposure and experience in peacekeeping operations in Syria will be beneficial [to the security of Pope Francis during his visit to the Philippines],” Armed Forces of the Philippines Chief of Staff Gen. Gregorio Pio Catapang Jr. said in a statement Sunday.

Two battalions of Filipino UN peacekeepers, including those withdrawn from the Golan Heights as well as those who had been training to replace them, will join a police-led security detail for the Pope, Catapang said.

An AFP battalion comprises about 500 soldiers.

The decision to involve the military in security for the Pope followed reports that Francis will not use a bulletproof vehicle during his Jan. 15-19 visit to the Philippines and an implied threat from the Islamic State (IS) in the Middle East to kill him for calling for international action against the jihadist group.

In July, a faction of the Abu Sayyaf group led by Isnilon Hapilon swore allegiance to IS, which has seized large swaths of northern Iraq and beheaded hostages from Western countries supporting the US-led air campaign to degrade and eventually destroy it.

The military has said it does not believe the al-Qaida-linked Abu Sayyaf has direct ties with IS and that the oath of loyalty is merely an expression of sympathy intended more to elevate its profile and for financial gain.

National Security Adviser Cesar Garcia said on Saturday that the Abu Sayyaf pledge was a “shallow show of support” for IS, riding on the popularity of the Middle East group in the international jihadi community.

Francis will eat a meal with the survivors, traveling to them in an unprotected vehicle.

During his visit to South Korea in August, Francis also ditched the bulletproof Popemobile, choosing to ride in an ordinary, Korean-made car.

Manila Archbishop Luis Antonio Cardinal Tagle has said the Pope does not use a bulletproof vehicle, even in the Vatican.

Some politicians have said the information may be exploited by the Abu Sayyaf, prompting the government to order “double security” for the Pope during his visit to the country.

Catapang said the AFP committed the two battalions to support the Philippine National Police in providing security for the Pope.

He said the military force would be under the operational control of the PNP, which would be in charge of overall security for the four-day papal visit.–With reports from Inquirer Research and AFP

Read Next
Breast cancer still the most common among women, says American Cancer Society
EDITORS' PICK
Smart poised to turn PH into ‘Smart 5G country’ with nationwide rollout
Full operation of more sectors, businesses pressed to spur economy
New Vatican ambassador to PH named
Water remains our saving grace right now
We don’t want gov’t to fail, because it’s all of us who will suffer and die — Robredo
Get 80% OFF Ignite 2020 Cyber Tickets starting 28 September
MOST READ
Palace: Some cities in Metro Manila eligible for MGCQ
Mayor Treñas tells Locsin: Iloilo City is much better than what you think
Fernandez: Velasco camp ‘betrayal’ pushes call to retain Cayetano as Speaker
Liza Soberano, Enrique Gil fly to US to be with actress’s ailing grandmother
Don't miss out on the latest news and information.