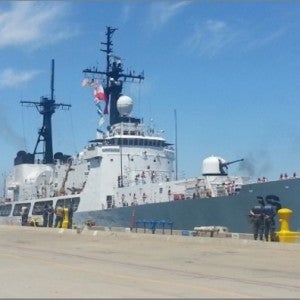 MANILA, Philippines—Philippine and Japanese ships are set to conduct a naval exercises in the waters off Palawan on Thursday, a Navy official said.

Alcaraz and Hatakaze were both participants in Kakadu 2014, an international naval exercise that the Royal Australian Navy hosted on August 25 and until September 12.

Domingo said the two ships would conduct the Passex while en route to their separate ports.

Alcaraz would set for Manila after a quick visit in Zamboanga while her co-participant Hatakaze would set for Japan from Singapore.

“Passex gives us an opportunity to not only practice what we might be called upon to do, but the chance to establish a professional relationship with our allies making us a more capable force working together at sea,” Domingo said.

“A passing exercise is composed of sea drills done between two navies to ensure synchronization of communication and cooperation between the participating navies in combined naval operations.”

She added that the naval exercise is not meant to provoke China, which has been in a territorial struggle with the Philippines.

“It has nothing to do with the South China Sea dispute, this is mainly for training purposes,” Domingo said. “This is still part of the Kakadu exercises.”

Kakadu 2014 is not yet entirely over for Alcaraz and Hatakaze as the two has not yet returned to their respective home ports.

Domingo said that the two ships just happened to pass by the South China Sea.

“This is for training purposes to improve our capacity, our interoperability with the navies protecting our maritime region,” she said.

PH, US to hold naval exercises near Scarborough

Read Next
Filipino fisher rescued off Taiwan after being adrift for 9 days
EDITORS' PICK
Is your company a growth champion? Stand up and be recognized!
New Year, New Rediscoveries
PNP’s Covid-19 cases jump to 9,809; 52 new infections logged
Acer Philippines welcomes you to its first flagship store
Pope Francis to miss events due to new flare up of leg pain—Vatican
More than 150 National Guard in Washington for Biden inauguration test positive for coronavirus
MOST READ
Dustin Poirier knocks out Conor McGregor at UFC 257
Ellen DeGeneres, too, is baffled by viral Filipino soda ad
AFP to apologize to UP alum falsely included in list of NPA members — Lorenzana
Why Kris Aquino sleeps with her pearls
Don't miss out on the latest news and information.