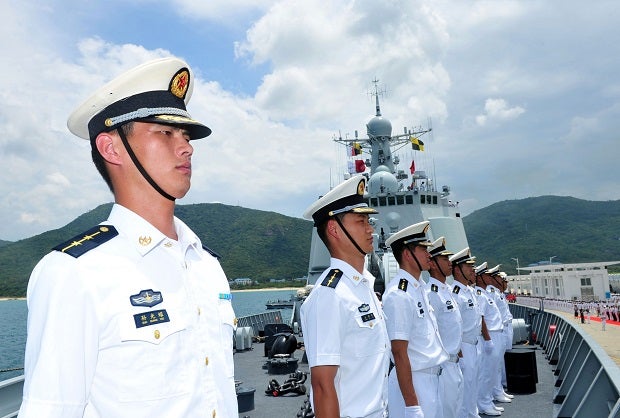 In this Monday, June 9, 2014 photo released by China’s Xinhua News Agency, Chinese naval soldiers stand on China’s missile destroyer Haikou at a naval port in Sanya, south China’s Hainan Province. The Chinese naval squadron has left port to take part for the first time in the world’s largest naval exercises hosted by the U.S. in waters near Hawaii. AP

MANILA, Philippines—The Philippines welcomed China’s participation in the Rim of the Pacific naval exercises, the largest of its kind, hosted by the United States in Hawaii, saying it would “ease tensions” brought by maritime disputes.

“We welcome (China’s) move as a way to ease tensions [and] as a part of confidence-building in the region,” Department of Foreign Affairs (DFA) spokesman Charles Jose said in a press conference Wednesday.

China deployed four ships to the world’s largest naval exercises being held in the Pacific every two years. Among those ships is the Chinese Peace Ark hospital ship that assisted in the relief and recovery effort in the aftermath of Super Typhoon Yolanda (international name Haiyan).

China will join the naval exercises for the first time bringing the total of participating countries to 23. At least 1,100 Chinese military officers and sailors including a commando unit and a dive team are onboard four Chinese ships.

Maritime disputes in the region have caused tensions between China and neighboring countries, including Japan, Vietnam, and the Philippines.

The Philippines is also locked in a maritime dispute with China over the Spratly Group of Islands which is claimed by China in its entirety. Manila has turned to the UN arbitral tribunal to settle the territorial conflict.

The Philippines is a participant to the naval exercises and has sent component staff personnel to the event.

China ships depart for naval drill with US, others

Read Next
PH assures EU it is curbing illegal fishing
EDITORS' PICK
LTO’s P500-M deal for screws draws scrutiny
Smart reinforces superiority with best speed and mobile video experience in PH
Every Filipino home can now be a smart home with realme TechLife
Nestlé Philippines’ ‘NESCAFÉ Plan’ bags Grand Anvil at PRSP 56th Anvil Awards
New 3,045 COVID-19 cases push PH total active cases to 40,074
How to lose a PH genius: Wesley So officially a US citizen
MOST READ
Robredo on Sara Duterte leading poll surveys: Why are Filipinos drawn to leadership of this kind?
How to lose a Filipino genius: Wesley So officially a US citizen
Hugpong Ng Pagbabago fully supports Sara Duterte says confidant Davao del Norte governor
Duterte on his ‘faults’: ’I just have cases of extrajudicial killings’
Don't miss out on the latest news and information.