New batch of peacekeepers ships out, this time to Haiti 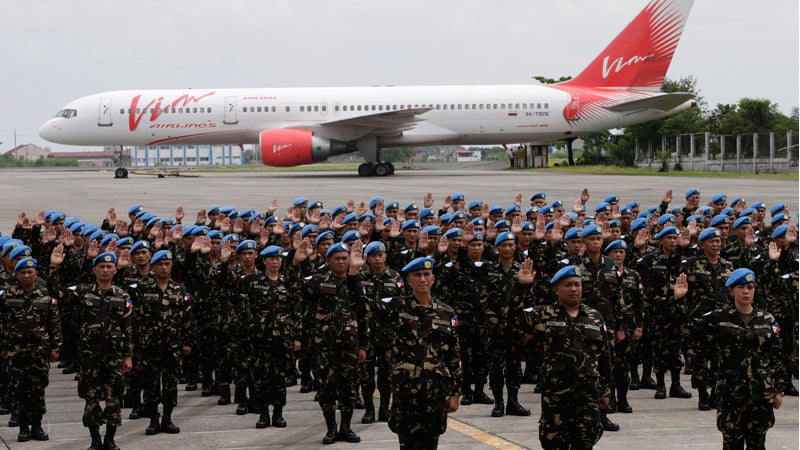 Philippine troops, who are to be deployed as U.N. Peacekeepers in Haiti, take their oath during sendoff ceremony Monday, Sept. 22, 2014 at Villamor Air Base at suburban Pasay city south of Manila, Philippines. Philippine President Benigno Aquino III said he’s been told security threats on the Syrian side of the Golan Heights are not expected to ease soon, dimming hopes that U.N. peacekeepers can be deployed back to the region in the near future. Monday’s sendoff came hours after the last batch of Filipino UN Peacekeepers arrived home after fighting rebels in Golan. (AP Photo/Bullit Marquez)

MANILA, Philippines–Petty Officer Second Class Jane Briones, 37, and her two daughters shared a tight embrace as she was about to leave for Tahiti, where she will be a part of the United Nations Peacekeeping Force there.

“I am sad and at the same time excited because I have this chance to serve as a peacekeeper; I am sad to leave my daughters and husband behind,” the tall woman in uniform said on Monday.

Before boarding her flight, she told her children to keep doing well in school so they would always end up with honors.

Briones, who is an expert in supplies and logistics, was one of nine women who left the country to serve as part of the 18th Philippine Contingent to Haiti (PCH).

Armed Forces of the Philippines Chief of Staff Gen. Gregorio Pio Catapang Jr. led the sendoff for the 18th PCH, which will be part of the United Nations Peacekeeping Force to Haiti.

Cmdr. Aldrin Doctor, contingent commander, said 40 of the 157 personnel were members of the Philippine Marines. Nine were women enlisted personnel.

Their mission will be different from that of the peacekeepers in the Golan Heights, who returned to the country last weekend after facing Syrian rebels in a standoff.

The 18th PCH will provide perimeter security for the UN Mission to Haiti headquarters, administrative and logistics clerical services, as well as operate military vehicles and provide security to VIPs.

The contingent will serve a tour of six to nine months, replacing the 17th PCH composed of 11 officers and 145 personnel led by Capt. Luzviminda Camacho, the first female contingent commander.

Catapang called on the peacekeepers to maintain their high standards of bravery, decorum, discipline and professionalism.