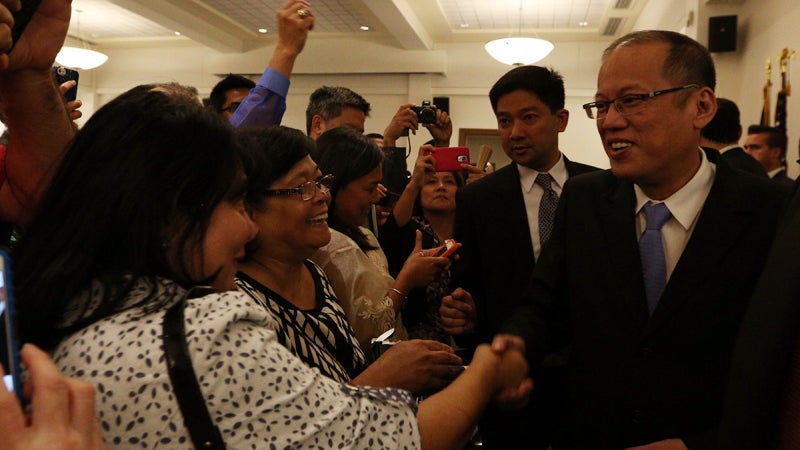 BOSTON COLLEGE VISIT President Aquino greets students, members of the faculty and members of the Filipino community at the reception line during his visit to Boston College on Sunday. RYAN LIM/MALACAÑANG PHOTO BUREAU

NEWTON, Massachusetts—President Aquino on Sunday expressed his gratitude to Boston College for renaming its Asian-American Scholarship after his parents, Benigno and Corazon Aquino.

“Mom and Dad placed a very high premium on education. They believed that a person can be famous one day, and a nobody the next; he can be rich today, and penniless tomorrow. But education is a permanent resource; once you have it, you can never lose it,” he said in a speech.

“I remember my father stating that there were two things he wanted most of all: to preserve our good name, and to ensure that we would learn the value of a good education,” Aquino added.

The Asian-American Scholarship was created in 1995 and renamed after President Aquino’s parents in 2010.

He said that for years, students questioned why the scholarship program was not named after a specific person like the Martin Luther King Scholarship and the Oscar Romero Scholarship for outstanding African-American and Latino students, respectively.

After two years of brainstorming for a name, Min recalled that someone eventually mentioned the Aquinos.

“They used to live down the street from us and they did a few important things in their lives. So we looked at their history and we were very impressed,” Min said.

The Aquino scholarship is awarded to students who are not only intelligent, dedicated and hardworking, but also embody courage, dedication to social justice, has a “commitment to giving back as much as they got.”

According to the Boston College website, the winner of the scholarship is given a $15,000 toward senior year tuition.

“What I personally love about the name—Benigno and Corazon Aquino—is that it tells us something about this problem for justice. It says that one might never see the fulfillment of one’s aspirations for justice. But that one, nevertheless, strives and finds courage to attain it,” Min said.

Matt Alonsozana, the recipient of the Aquino scholarship in 2014, told the President that it was “humbling” to be named “in honor of heroes who gave their lives to better realize the restless dream of Philippine freedom, and who in the spirit of democracy demonstrated to the world that the Filipino is worth fighting and dying for.”

In his speech, the President said his father once told him: “The most basic freedom is the freedom from hunger, and until that is resolved, everything else is irrelevant; political freedoms are nothing but mere afterthoughts to a people deprived of food on the table.”

He said he now had the chance to “apply this idea, and help our country recover from its lost decade under the previous administration.”

Aquino gave a detailed list of his administration’s accomplishments: the economic turnaround, the conditional cash transfer program, reforms in graft-ridden Bureau of Customs and Department of Public Works and Highways, the peace agreement with the Moro Islamic Liberation Front, and the campaign against corruption, which led to the detention of former President Gloria Macapagal-Arroyo and three sitting senators for plunder.