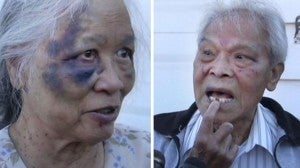 Jamie and Paz Nagal, both 90, show serious bruising and a lost tooth, after a man and woman beat them during the second of two visits to the couple’s home.

EL CERRITO – Two home invaders severely beat and robbed a Filipino couple in their 90s on September 16 after tricking the husband and wife into letting them into their home twice in two days, police said.

Jaime Nagal and his wife of 48 years, Paz, had lived peacefully for 44 years their Richmond Street home. The pair of robbers, a man and a woman chatted with them about their flowers, talking their way into the home, distracting Jaime while Paz cut flowers for them to take, according to the Contra Costa Times.

Later that evening, the couple realized that a wallet, jewelry and cash were missing from an upstairs bedroom. They called their son, who canceled their credit cards, but they did not alert police.90-year-old couple brutally attacked in El Cerrito home

The next day, the suspects returned. Although the Nagals believed that the suspects were the ones who had stolen from them, they again allowed them into their home.

The robbers beat Jaime and bound him with duct tape and left in a bedroom. They also beat Paz, stabbed her in the arm and also bound her. They then loaded a safe from the home onto the dolly.

When Paz tried to call 911, the female suspect returned and beat her again, police said. Paz was able to escape as the suspect left and sought help from neighbors. The husband freed himself and called 911 around 5:20 p.m.

Both suspects spoke English with accents and spoke another language that the victims did not recognize, police said. They were driving a two-door, dark blue vehicle.