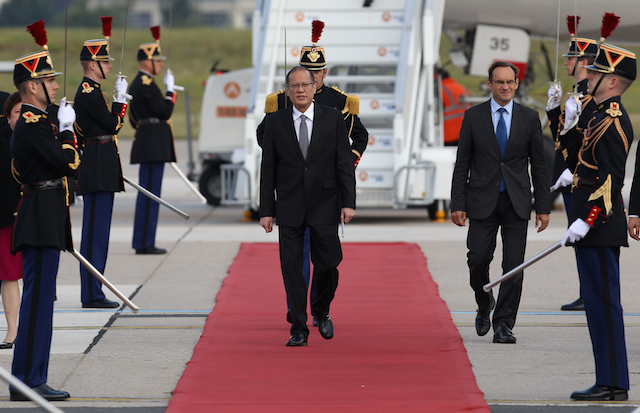 PARIS—Twenty-five years after the historic visit of the late President Corazon Aquino, her only son got his own taste of a Parisian welcome.

France rolled out the red carpet—80 meters to be exact—when President Aquino arrived Wednesday at 10 a.m. (4 p.m. Manila time) at Orly Airport from Brussels, on his way to its Salon d’Honneur.

He proceeded on board a presidential car to the presidential suite of the Hotel InterContinental Paris Le Grand, which offers a stunning view of the Paris Garnier Opera House.

The President was given military honors at Arc De Triomphe, the iconic structure built in honor of soldiers who fought during the Napoleonic Wars, where he also laid a wreath at the Tomb of the Unknown Soldier.

Judging by how the French prepared for Aquino’s official visit, he was no ordinary guest.

Both French President François Hollande and Prime Minister Manuel Valls were scheduled to meet separately with Aquino on the first day of his visit. Aquino’s grand reception included a luncheon hosted by Hollande at the Palais de l’Elysée.

It was not usual for both the French president and prime minister to meet a visiting head of state or government, Philippine Ambassador to France Maria Theresa Lazaro told the Inquirer via e-mail.

The Philippines on Wednesday got a strongly worded statement of support from France in its effort to come up with a peaceful resolution of its territorial dispute with China.

Presidents Aquino and Hollande issued a joint statement rejecting “any acquisition or claim, by coercion or force, of any or all territory of a State by another State, in violation of international law, especially the Charter of the United Nations.”

With Hollande attaching special importance to the visit of Aquino, both leaders “emphasized the importance of the full and effective implementation” of the Declaration on the Code of Conduct of Parties in the South China Sea.

They also called for the “early conclusion” of a binding Code of Conduct to promote “peace and stability” in the region. The joint statement pretty much adopted the Philippines’ proposed Triple Action Plan to peacefully resolve disputes in the South China Sea, around 90 percent of which is being claimed by Beijing.

Hollande noted the importance of Aquino’s official visit, which came 25 years after France had rolled out the red carpet for his mother, the late President Corazon Aquino, in 1989.

‘You are her continuity’

“You are not just her son—you are her continuity,” Hollande told Aquino through a translator. “You embody democracy in the Philippines.”

The President’s arrival came more than two decades after France first rolled out the red carpet for his mother in 1989, three years after the Edsa People Power Revolution. She has since become a towering icon of democracy.

How the French valued Corazon Aquino was documented by the Presidential Management Staff in 1992. Among the world leaders invited to the Bicentennial Celebration of the Fall of Bastille in 1989, she was “bestowed the singular honor of being the only state visitor,” it noted.

“This rare honor was given prominence along Champs-Elysees where the Philippine flag was flown alongside the French tricolor during the peak of the celebrations,” it recalled.

“Hundreds of French Republic Guards on horseback were a magnificent sight to behold as they cantered forward, blowing on trumpets as they escorted President (Cory) Aquino to the State Guesthouse. All roads leading to Marigny were closed to traffic to accommodate the Presidential entourage.”

Years later, the younger Aquino got his turn, his visit “important in both the message it sends and its symbolism,” Lazaro said.

She noted how the Philippines turned from a “pariah state” of France during martial law, to its “darling” when democracy was restored in 1986.

France was the first country to recognize the Cory Aquino government.

Lazaro recalled that at the state dinner for Cory Aquino, then French President François Mitterrand explained why she was a special guest.

“The commemoration of the Bicentenary of the French Revolution… is, for us French, somewhat exceptional. I wanted to invite, for this occasion, a few of those people who are working to create a more just and more generous world in the spirit of the universal values of human rights and democracy that France proposed to the world in 1789,” Mitterrand had said.

“Twenty years later, bilateral relations between the Philippines and France have evolved,” Lazaro said. “While cooperation in culture as well as in official development assistance remains, foremost in President Aquino’s agenda with President François Hollande are economic and trade relations, including defense cooperation.”

Aquino cited the “shared values” between Paris and Manila, noting that France was “among the first in the community of nations to recognize the revolutionary government of my mother,” following a bloodless revolt in 1986.

“France, at a critical juncture in my nation’s history, stood by us, as we worked to rebuild our democratic institutions. Then as now, France has been a close friend and a reliable partner of the Filipino people,” he said.

Hollande and Aquino witnessed the signing of three agreements: Updated Air Services Agreement, the 2014-2016 Executive Program of the Cultural Cooperation Agreement, and a Memorandum of Understanding between the Development Academy of the Philippines (DAP) and the French National School for Administration (ENA).

A fourth agreement was signed between Globe Telecom and French telecommunications company Alcatel-Lucent over the Filipino firm’s move from 3G to 4G technology.

The Air Services Agreement will pave the way for direct flights between Manila and Paris, which “will boost tourism and economic trade,” Lazaro told the Inquirer.

The ambassador said the cultural cooperation agreement would “provide for visiting artists, heritage restoration and conservation and cultural management, among others.” “The MOU between the DAP and ENA will provide for academic exchanges, particularly in the field of the training of public servants,” Lazaro added.

Aquino said he was looking at France as a “reliable partner” in the ongoing modernization of the Philippine military.

France and the Philippines are set to sign later this year an updated defense cooperation agreement, renewing the one signed in 1994. The new deal would cover defense equipment, logistics and defense industries, the two leaders said.

Hollande said he and Aquino agreed to place political cooperation between their two countries at an “exceptional level.”