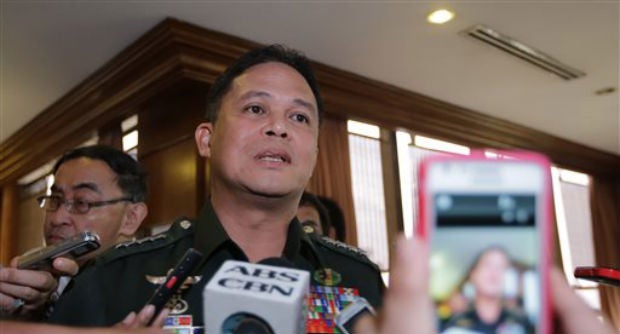 FORT DEL PILAR, Baguio City—The officer who supported the Filipino peacekeepers when they went against the orders of their United Nations commander and escaped a standoff in the Golan Heights last month has instructed Philippine Military Academy cadets to be good followers as they train to become future leaders.

Addressing 319 new plebes of the PMA “Alab-Tala” Class of 2018 on Saturday, Gen. Gregorio Pio Catapang Jr., said the traditions and customs of the academy intended to teach the cadets that “before you become leaders you have to be followers.”

“Being a plebe, the lowest class in the corps, you will have to follow orders and that is what we inculcate in our cadets,” said Catapang, the Chief of Staff of the Armed Forces of the Philippines.

The plebes were formally recognized as fourth-class cadets during Saturday’s ceremony. Alab Tala stands for Alagad ng Lahing Binigkis ng Tapang at Lakas (Disciples of the Filipino race who are bound together by courage and strength).

Catapang, a member of PMA “Dimalupig” Class of 1981, counseled the cadets against treating the PMA traditions as a way for older cadets “to make fun of you as plebes.”

“Behind these odd and weird traditions lie the tactical lessons you must learn the hard way,” he said, adding that these involve the value of submitting to authority to understand principles like time management.

When asked about the apparent contradictions of his message and the Golan Heights incident, Catapang said he had been directed to say nothing more about the controversy to allow diplomats to sort out the issue.

Earlier, Catapang rebuked an official of the United Nations Disengagement Observer Force (Undof) for supposedly ordering about 70 Filipino peacekeepers to lay down their arms after Syrian rebels overran a section of Golan Heights and seized 44 Fijian peacekeepers.

Undof maintains a ceasefire between Israeli and Syrian forces, but the rebels had trapped the Filipino soldiers for two days and were instructed by an Undof official to yield so as not to jeopardize the Fiji captives.

With the backing of the AFP, the peacekeepers ignored their Undof commander and fought back. They eventually slipped through the rebel gauntlet.

Lopez said Catapang’s convictions regarding the Golan Heights issue proved that he was aptly named by his parents. “Gregorio was taken from slain revolutionary hero Gregorio del Pilar, and Catapang is the Tagalog word for bravery,” Lopez said.

But Catapang himself made no reference to the AFP decision that was hailed as an act of courage and sovereignty.

Instead, he narrated how he was almost bullied into quitting by his own upperclassmen, who were concerned about his age. “I entered the academy at 17,” he told the cadets. “Had I heeded the instructions of my upperclassmen, I wouldn’t be your chief of staff today.”