PH-Spain bilateral relations in a nutshell 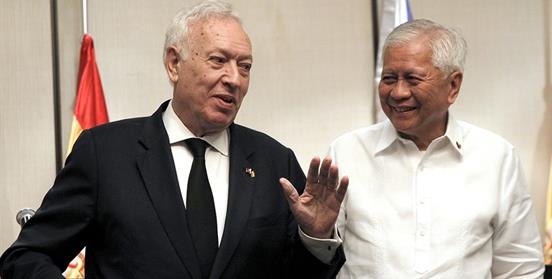 The Spanish Minister of Foreign Affairs and Cooperation, José Manuel García-Margallo (left), with his counterpart, the Secretary of Foreign Affairs, Albert del Rosario (right) during a visit in the Philippines in March 2014. Photo from the Spanish Agency for International Development Cooperation (AECID) website.

MANILA, Philippines – As President Benigno Aquino III begins his trip across four countries in Europe starting with Spain, here is a summary of the current bilateral relations between Philippines and Spain.

The Philippines was a colony of Spain for 333 years from 1521 to 1898. Formal diplomatic relations were established in September 1947.

As of 2013, trade exchanges between Philippine and Spain reached $590 million, according to the Spanish Agency for International Development Cooperation (AECID) website.

Spain has also donated around 28 million Euros in humanitarian aid for those affected by natural disasters since 2007.

In October 2012, Philippines and Spain signed the following five agreements that aim to boost bilateral relations of both countries in the fields of sports, culture, and education.

In a visit to the Philippines by Spanish Minister of Foreign Affairs and Cooperation, José Manuel García-Margallo in March 2014, another five bilateral agreements were signed or stamped:

There are more than 33,000 Filipinos in Spain, majority of them, about 21,000, are permanent residents, according to the December 2012 figures of the Commission on Filipinos Overseas.

There are also around 9,000 temporary-status Filipinos and almost 3,000 irregulars.

From January to June of 2014, there were 8,655 tourist arrivals from Spain, according to figures from the Department of Tourism.