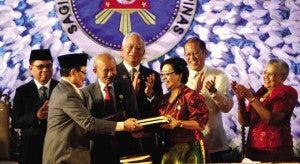 President Aquino and Malaysian Prime Minister Najib Razak (center) applaud as peace panel chairs Miriam Coronel-Ferrer of the Philippine government and Mohagher Iqbal of the Moro Islamic Liberation Front exchange copies of the Comprehensive Agreement on the Bangsamoro that they signed on Thursday, March 27, 2014, in Malacañang. LYN RILLON

MANILA, Philippines – The international community hailed the submission of the Bangsamoro Basic Law (BBL) draft by President Benigno Aquino III to Congress, calling it an important step towards peace and development in Mindanao.

“This is a critical milestone in the implementation of the Comprehensive Agreement on the Bangsamoro (CAB), and a crucial achievement in ensuring lasting peace and sustainable development in Mindanao and in the wider Philippines,” the United Nations (UN) in the Philippines said in a statement following the formal turnover ceremony in Malacanang.

“This is a crucial step in the road map to achieving peace and development in Mindanao,” it said.

Australia and Canada also hailed the submission to Congress of the BBL, saying they will continue to support the government’s efforts to bring peace to the region that has seen decades of conflict from separatist rebel groups.

“The pending substantive debates on the bill are important steps in the process aimed at achieving lasting peace and long-term prosperity in Mindanao. Together with the international community, Canada remains committed to being an active partner in continuing our support for the establishment and implementation of the Bangsamoro,” Canadian Ambassador to the Philippine Neil Reeder said in a statement.

The bill will need to be passed in both houses of Congress after which a plebiscite will be held for the creation of the Bangsamoro autonomous region, which will replace the Autonomous Region in Muslim Mindanao (ARMM).

Senate President Franklin Drilon said in a previous interview that he sees the passage of the bill before March 2015, citing the other things they have on their plate such as deliberations on the 2015 budget.

House likely to take up Bangsamoro bill early next year