China told not to worry on PH-US war games 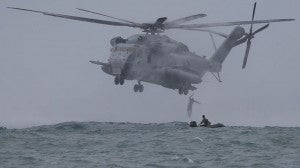 A Philippine Navy official on Tuesday maintained that the Amphibious Landing Exercise 2014 (Phiblex) is not aimed at sending a message to China amid the West Philippine Sea territorial dispute.

Lieutenant Commander Marineth Domingo, Philippine Navy Public Affairs Office Chief, said the Phiblex between the Armed Forces of the Philippines and the United States Marines is only for training purposes.

“We would like to train amphibious units to contribute to the national maneuver force,” Domingo added.

Around 2,300 service members from the Philippines and the United States are set to attend the third major war games in the country, which is set to take place from September 29 to October 10.

Domingo said the sole objective of the Phiblex is to enhance the cooperation between the two Armed Forces and the security cooperation in the Asia-Pacific region.

“It’s to improve interoperability and combat readiness of the participating forces,” Domingo said. “And of course enhance security cooperation in the region.”

Balikatan and Cooperation Afloat Readiness and Training (Carat) are the other two major war games between the Philippines and the United States.