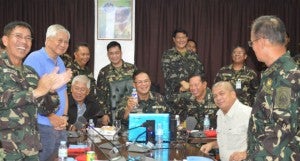 Top defense and military officials cheer at Camp Aguinaldo on Sunday, Aug. 31, after the successful repositioning of Filipino peacekeepers who figured in a standoff with Syrian rebels in Golan Heights. File photo by CPL Palima, CRS-AFP.

MANILA, Philippines – The Department of Foreign Affairs (DFA) is mum on what steps they are going to take before the United Nations (UN) regarding concerns of Filipino peacekeepers who escaped Syrian rebels in the Golan Heights.

When pressed for further information on what these steps were, whether it would be a submission of a letter or a complaint, Jose refused to comment further.

Asked when these steps would be undertaken, Jose simply said that it was up to the UN mission in New York to handle that.

“We should focus now on supporting efforts to secure the freedom of the Fijian peacekeepers,” Jose said.

“At this time, the statement that we gave is enough,” Jose said.

Asked about the detailed report of the incident submitted by the Armed Forces of the Philippines (AFP), Jose said that he has not yet read it.

General Gregorio Pio Catapang, AFP Chief of Staff, repeatedly said that the Filipino peacekeepers disobeyed an order from Lieutenant General Iqbal Singh Singha, UN Disengagement Observation Force (UNDOF) commander, to hand over their weapons and surrender in order to save themselves.

Singha had denied the allegation, saying he only ordered the peacekeepers “not to shoot” and even called the Filipinos actions as “an act of cowardice.”

Hervé Ladsous, UN Undersecretary General for Peacekeeping Operations, sided with Singha, saying that no UNDOF Commander would order the handing over of weapons to rebels.

“The situation on the ground is a fluid one and the decision was to launch the Quick Reaction Force to extract the peacekeepers. General Singha exercised good, solid judgment [throughout] the process,” Ladsous said in a news report.

Lieutenant General Ramon Zagala, AFP Public Affairs Office Chief, said that they have the complete details of the incident that would justify the actions of the Filipino troops to disobey the UNDOF commander’s orders.

“We have all the records, all the reports needed to support the actions of our troops [on] the Golan Heights,” Zagala said.

“We will make all these reports and manuscripts available to the Department of National Defense, DFA, and they will coordinate with the United Nations on what actions should be taken,” he said.

Communications Secretary Herminio Coloma Jr. said that they backed the actions of the Filipino troops.

“We are not contradicting what they (Filipino troops) said. Of course, we are standing by the courage and skill of our troops [on] the Golan Heights,” he said.