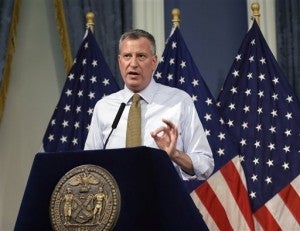 The Outstanding Filipino Americans in New York (TOFA-NY) are chosen by popular vote conducted via social media, and awardees will be honored at a ceremony set for October 25 at Carnegie Hall.

“With an estimated 200 spoken languages and more than three million residents born outside of the US, New York’s diversity in unparalleled,” de Blasio said in a statement. “Our large and thriving Filipino population is an invaluable thread in the fabric of our city.”

Maria Ressa, formerly CNN’s bureau chief in Manila and Jakarta, and one ofthe founders of Rappler, the Philippines’ first Internet-based news organization, will host the event. She has been covering Asia for more than 25 years. She lived in Toms River, New Jersey with her family, and graduated from Princeton University where she studied biology and English.

This year’s TOFA-NY awards will also feature a stellar lineup of entertainers led by Darren Espanto of “The Voice Kids Philippines ”and Geo Ed Rebucas, a “Pilipinas Got Talent” finalist.

The following are nominees for 2014:

Heritage Awards will be awarded to five individuals and organizations whose skills, competence, professionalism and talent helped elevate the profile of Filipino Americans throughout the Tri-State.

The people behind TOFA-NY are multimedia professionals and entrepreneurs, with Elton Lugay as founding chair, and Sally Nunez, Cristina DC Pastor (Nominations) and Oliver Oliveros (Publicity) composing the board.

Here is the link to vote:

TOFA-NY at 2: One ‘enchanting evening’