A PH tour buffeted by storms 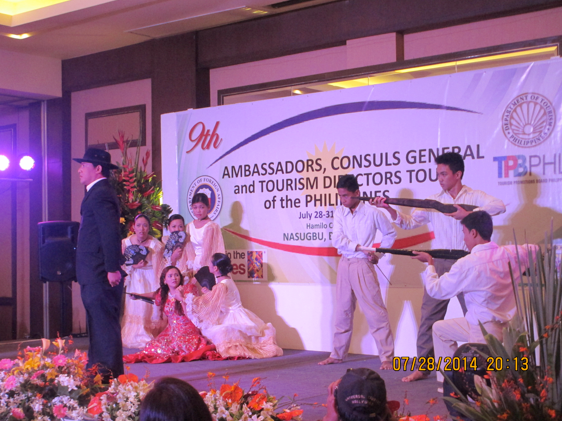 One of the many cultural presentations performed July 29 by the school students of Nasugbu was a pageant on Philippine History including the martyrdom of Dr. Jose Rizal. City Mayor Charito Apacible headed the reception party. PINOY PHOTO

CHICAGO, Illinois — It was 10 years ago that the Ambassadors, Consuls General, Tourism Directors Tour of the Philippines was launched. Until last year, Filipino Canadians were part of this annual project, but last January, those neighbors up north, ventured into their own “Winter Escapade.”

In its decade of existence, there was only one year that the tour was called off, thus this year’s is the 9th ACGTDT, not the 10th. Without the Canadians, the number of participants dwindled to fewer than 50 percent of the usual numbers, or just 260.

True, this year’s tour luckily started just after the destructive typhoon Glenda had blown out of the country. Two other tropical storms stayed away from the area, giving us relatively fair weather, but there are reasons why it should have been scratched.

Call these storms by themselves: There are the major road repairs in the main thoroughfares of Greater Manila and the slow NAIA Terminal 1 reconstruction. There’s the End of Ramadan holiday, the State of the Nation Address of the President and even the opening of the Iglesia ni Cristo’s world’s biggest covered coliseum, not to forget the monsoon weather. These were like storms on the radar that the coordinators should have taken into consideration.

ITEM July 28: On the first day, the tour guide from Rajah Tours told us that being Monday, the announced visits to the Ayala and the University of Sto. Tomas Museums were being replaced by a visit to San Agustin Church Museum. Additionally, late morning rain truncated the scheduled visit to the Bangko Central Museum. 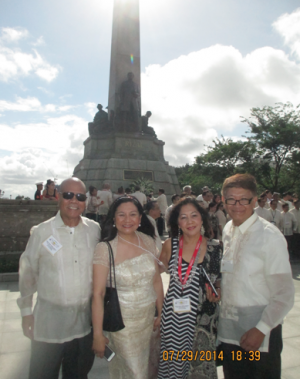 PINOY publisher Anong Santos (right) poses with the Detroit participants including Rebecca Tungol (2nd from left) who won the top prize of Western Union raffle of a round trip to the Philippines while Efren Balancio won an iPad. PINOY PHOTO

The newly appointed Honorary Consul Audie de Castro (San Diego) summed up these early surprises. Being a second generation Filipino-American, he intimated that he is still trying to adjust to the Filipino way of communicating—it is never direct and clear, and one is always entrapped into something you least expected. This honorary diplomat is also a prophet, if I may say, in view of what awaited us in the next few days. (He was part of the Los Angeles group—the biggest delegation. LA is also this year’s coordinator.)

After watching President PNoy’s SONA on TV early evening, we were treated to a Mindanao-themed welcome reception at Makati Shangri-La. The entertainment was world-class. “The Englighten Black Theater Group” showcased a magical choreography with a subtle environmental message. El Gamma Penumbra certainly made the hosts of the evening ecstatic in its “It’s More Fun in the Philippines” number. If you are in search of a local performing company, the producer Fantasmic Production Haus is highly recommended.

ITEM July 29, Day Two: Because of End of Ramadan, there was another juggling of schedules. The trip to Malacanan Palace was pushed back to Day Three and the out-of-town excursion to Nasugbu, Batangas, was moved forward, resulting in a big disappointment for those who looked forward to meeting Batangas Governor Vilma Santos, who was a no-show because she could not adjust to the changes.

Anyway, Nasugbu Mayor Charito Apacible and the area Tourism personnel came out big, complete with school bands, dance troupes and other cultural groups—the presentations were somewhat lengthy and overdone. Food was generous to a fault. (Our new ConGen Gene Colonge quipped sadly about the enormous amount of leftovers.)The meandering speeches, like that of area DOT boss, Emily Katigbak, who stood in for Ate Vi, did not help either.

Was this one instance that hospitality felt unwelcome after a certain point? The promised snorkeling or nature-appreciation in the much-hyped Hamilo Cove was sacrificed, thanks to the uncontrolled cultural presentations and the mid-afternoon downpour.

The hectic trip from Nasugbu affected the enthusiasm of the already jet-lagged participants. Credit the corporate sponsor, Western Union, for its outstanding reception. Their Lady Jazz Trio, the violin virtuoso and the dance troupe were so engaging and helped most of those who made it to the dinner survive their tiredness.

Western Union also presented a $20,000 check to Save the Children, the recipient of its annual grant to NGOs that help talented but poor youth. The company had a raffle, and two of the major winners were from the Chicago group.

Rebecca Tungol and Efren Balancio won a round-trip ticket to the Philippines and an iPad, respectively. The two were part of a group that just finished its volunteer work in Tacloban before they joined the Ambassadors Tour. (Call it providential, but if anyone should win, it is these charitable persons.)

ITEM July 30, Day Three: It is surely patriotic to lay a wreath at the tomb/monument of the National Hero, Jose Rizal. Due to the traffic and construction around the Rizal Park, it made it a struggle to rush in one’s terno or barong to the point of convergence. But, duh! Those who came ahead just did the ritual, offered their flowers and forgot the rest. Curses! This was just the start of another unpleasant day. At the Palace, a practice drill of calling different delegations to the stage was undertaken before the coming photo opportunity with the President. 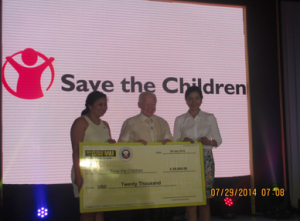 WESTERN Union, a consistent ACGTDT sponsor, hands over to Ambassador Jose Cuisia a $20,000 donation to Save the Children during its July 29 dinner-reception at Dusit Hotel. PINOY PHOTO

But the beleaguered PNoy was a too busy with his budget that he needed to submit to Congress, so said Secretary Herminio Coloma, thus, and broke the heart of mostly the first time participants. Honorary Consul Ethel Mercado could not diplomatically hide her disgust, muttering something about bait and switch. Young Isabel Gilles, in her sweet way also expressed disappointment over not seeing PNoy.

The subsequent tour of the Palace did not help much. “Dusty,” “ill-kept,” “hot,” “neglected,” “sayang naman,” were the utterances of an obviously disappointed bunch about the Palace museum. Another Tacloban volunteer, and novelist, Almira Gilles was particularly dismissive of the shrill woman-emcee of the after-lunch program at the Palace Heroes Hall.

But there was something positive about the Palace trip. The lunch catered by Via Mare was a delight. Oh, those tasty paco (fern) and ubod salads!

July 31 was checkout day. It was the start of the post-tour (or departure for the U.S) phase. Palawan, Boracay and Cebu were the top choices. When I inquired about Vigan, I was told that no one reserved for that destination. Vigan being on the short-list of the new seven wonders of world being voted online, I checked out the heritage city; but that is a subject for another article.

Post-tour was when you’re on your own. No police escorts this time. So just like the rest of the suffering Manilenos you shared their pain of going through its hellish traffic. One started feeling the shame that for three days you were pampered, subsidized and yet whiny about small inconveniences. The relentless rain was no consolation. On departure day, sans the sampaguita lei, was when you confronted the question on who would like to organize a tour on the condition that NAIA Terminal 1 is in?

Indeed, if there was another ACGTDT that should have been cancelled, it was this year’s. Perhaps, the Canadians were right. Why not do it in the Winter? And please qualify the come-ons with the phrase, “Meet Pnoy subject to his availability.”