DOH: Nurse from Saudi returns to PH positive with MERS-CoV 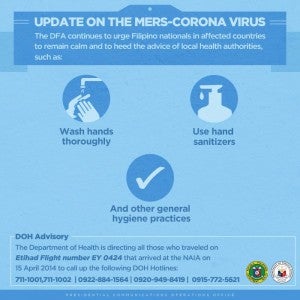 MANILA, Philippines–The Department of Health said in a press briefing Wednesday that a Filipina nurse who has returned to the country from Saudi Arabia has tested positive for Middle East Respiratory Syndrome- Corona Virus (MERS-CoV).

The nurse is currently confined at the Southern Philippines Medical Center in Davao City for confirmatory tests.

Despite this recorded case, Ona maintained that the Philippines is MERS-CoV free.

The DOH said that it is now monitoring 240 passengers of Saudi Airlines and almost 100 passengers of Cebu Pacific who boarded the planes with the nurse.

Ona asked overseas Filipino workers from the Middle East to be tested for MERS-CoV before coming back to the country.

The health secretary also said that isolation rooms in hospitals have been prepared and doctors have been briefed to respond to MERS-CoV cases.

MERS-CoV is a viral respiratory disease which was first reported in Saudi Arabia in 2012.

As of July 23, 837 laboratory-confirmed cases including 291 deaths have been reported to the World Health Organization.