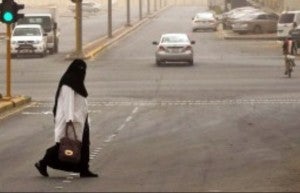 Her husband, a government worker, told the Philippine Daily Inquirer on Wednesday that he received a call from the hospital director to inform him that she had passed away.

The husband, who asked that their names be withheld, said he received his passport from the Department of Foreign Affairs on Monday, in the hopes that he could be with his wife while she was in treatment. But now that his wife is dead, he only wants her remains be sent back to Negros Occidental.

He was informed by the co-worker of his wife that a nurse from the Philippines who also died of MERS-CoV was frozen for two months before the body was shipped home to ensure that the virus could not cause further infection.

He expressed hope this could be done for his wife, too.

A Filipina nurse working in the same hospital, who asked not to be identified, said they have been taking extra precaution such as wearing long sleeved uniforms and double masks.

The husband of the Filipina nurse who died on Tuesday said his wife, 45, had been working in Saudi Arabia since 2001. Four years later, she worked at King Fahd Medical City in Riyadh as an emergency room nurse.

She was supposed to come home in March for their daughter’s graduation but was not allowed to go on leave.

Their 13-year-old daughter, an only child, graduated with honors in the elementary.

“Perhaps if she had come home, then she would not have been infected with MERS-Cov,” he said. The last time his wife came home was from February to March of 2013.

Last May 1, his wife informed him that she had been admitted in the hospital for pneumonia.

Later, her co-worker, also a Negrense, informed him that a bypass tube had been placed through his wife’s mouth to suck out the phlegm in her lungs to help her breath, the husband said.

The co-worker informed him that before his wife fell ill, she had taken care of a fellow ER Filipina nurse from Manila who was infected by the deadly virus, her husband said.

Etihad Airlines passengers who have yet to test for MERS-CoV