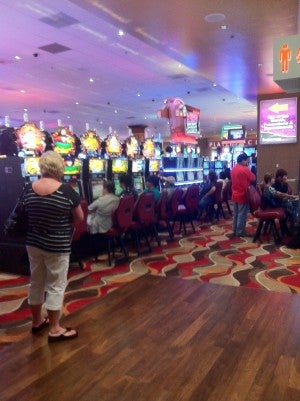 Filipinos at a bank of slot machines in an Indian casino. PHOTO BY CECILE OCHOA

LOS ANGELES, California–Yes, this is about Baby Boomers and older generations, but no, this is not about Club Med, Carnival Cruises or cross-country drives in an Airstream RV. This is about like “being at the Vegas Strip.”

Nowadays, however, for many Californians in their sixties and older, having Vegas-style fun is more often done in any of the 22 Indian casinos operated by sovereign tribes. The more popular ones can be as far south as San Diego; there are also such casinos up north in Sacramento.

Filipino senior citizens are among the most avid Asian “gamers” (the preferred term for gamblers) like the Chinese, Vietnamese and Koreans.
Growth industry

This $7-billion growth industry in California, which is not powered by the Internet revolution, fills the void in many a senior’s life in retirement. It’s often a welcome relief from the rigors of taking care of their upwardly mobile children’s children.

For those who don’t have any grandchildren or any care giving duties (now commonly referred to as “APOstolate”), it becomes an escape from inevitable boredom in a typical senior citizen’s day.

The casinos are well tuned-in to this reality as busloads of senior citizens are a common sight at casino welcome desks and on the casino floors. There are ubiquitous casino buses waiting for daytrip players at numerous passenger pickup locations in large cities like Los Angeles and San Francisco.

Leonard Greene, one of the casino hosts for Valley View Casino & Hotel near San Diego, estimates that “Filipinos make up 30 percent of our regular patrons.”

Lydia O., a businesswoman from San Lorenzo Village Metro Manila who was visiting relatives in Southern California observed that “50 percent of the patrons that weekend looked Filipino.”

She took note of Valley View Casino & Hotel’s big white tourist buses driving in and out of the casino’s welcome zones, dropping off many of her kababayans. “Some of them in wheelchairs, some in canes and could hardly walk, but they all looked very happy,” she smiled. 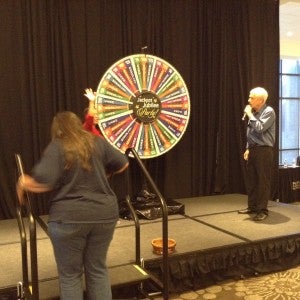 Chance to win free playing money in spinning wheels is among perks to entice visitors. PHOTO BY CECILE OCHOA

Valley View Casino & Hotel’s bus schedule shows there are free buses from many points in the LA area, like Alhambra, West Covina and Orange County, where there are large Asian and Filipino communities.

Filipinos have a pronounced presence in other casinos whether at Pechanga in Temecula, San Antonio in San Bernardino, or Cache Creek in Sacramento.

Las Vegas and the Indian casinos have scrambled to gain market share in the face of reported declines in casino attendance and play as a result of the economic doldrums of the past several years.

In addition to the usual perks of free hotel rooms, play money and free lobster dinners, favored players—including many Filipinos—are rewarded with gifts ranging from wristwatches to cookware and kitchen appliances at Valley View Casino & Hotel.

A special promotion offering the prospect of winning $1,000 slot play and up to a $500 cash prize convinced Thelma, a Filipina-American x-ray technician in an Orange County hospital, to make the two-hour trip to Valley View Casino and Hotel in Valley Center, California. She took her retiree parents for their earlier-than-planned weekend at the casino.

“It’s the thrill of the sounds of the machines and the colorful video displays,” that make her parents fascinated with the Indian casino said Thelma.  Her parents hail from Macabebe, Pampanga. She was born in Anaheim.

“Of course, there’s the excitement of winning something for the next casino trip,” she laughed. My sister and I take turns to drive them to their favorite Indian ‘playgrounds’. We do enjoy playing with them and at the same time bringing them food at their favorite stations.”

Some are not overly enthusiastic about casino playing among the elderly Filipinos.   A recent study by Carol Kimbrough and Susan Araneta of CDK Consulting confirms that “among elderly Filipinos, the problem of isolation and need for social interaction leads to engaging in gambling activities,” such as those in the thriving tribal casinos in California.  The study cautions that “since they (the seniors) are on fixed incomes, losing money through gambling may lead to dire consequences such as the inability to buy food or pay for housing.”

Kimbrough writes that “some of the games in the casinos are good for the memory of the seniors-doing arithmetic operations and logic; so some health practitioners encourage their patients to go to casinos as long as it is done responsibly ‘na hindi mag-de-develop ng problem gambling’.”

For those already hooked, here’s an advice from the Cal state Fullerton professor:  “Set a budget and stick with it –for example, bring only enough cash and leave your credit cards at home.”

A retired employee from Panorama City commented, “This is an alternative to senior-sitting parents.”  He observes friends driving their elders once a month to nearby casinos, leaving them to their excitement for five to six hours and picking them up later.

Frank M., a care-giver from a rehabilitation center in L.A., observed, “It’s amazing how some of my patients who barely have energy to walk daily suddenly straighten up as soon as they see the lights of those machines. I would say if that’s their therapy for mental and physical stability, let them enjoy,” he laughed.

Even religious groups and community fundraisers have used the Indian casinos’ “free shuttles” to raise funds for their favorite causes with the senior citizens as the target market.  It is common for them to reserve one or two 60-passenger tourist-style buses to bring excited senior citizens to Pechanga casino in Temecula, for example. “It’s a quick and easy way of raising funds,” said Aileen Y., who chairs an event, “and provide the weekend entertainment for homebound senior citizens.”

It is not a stretch to say that casino playing is therapeutic entertainment for Filipino American senior citizens, despite the risk of losing their social security supplementary income.  Like anything else, the best rule to follow is moderation.