MANILA, Philippines–He may be short in height, but 56-year-old Chinese lawyer Wang Canfa is a giant and the poor’s champion against unscrupulous businesses hurting them and the environment.

For almost two decades, Wang, a legal scholar specializing in environmental law, has represented his country’s downtrodden who, due to poverty, have been powerless and voiceless against erring huge companies.

Through the Beijing-based Center for Legal Assistance to Pollution Victims (CLAPV), which he formed in 1998, the lawyer has pursued hundreds of cases and offered free legal services to poor clients.

“Most of my clients are poor. Can you imagine how pollution results in the loss of property and livelihood?” Wang said, speaking through a translator, in an interview with the Inquirer.

In ceremonies Sunday, Wang accepted the Ramon Magsaysay Award, Asia’s equivalent of the Nobel Prize, with four other individuals and an organization from Pakistan.

The awards, named after the well-loved Philippine President who died in a plane crash in 1957, are given annually to honor those who have rendered selfless service to the people of Asia and have made valuable contributions in addressing issues of human development.

Besides Wang, the awardees this year are Hu Shuli, a Chinese investigative journalist; Saur Marlina Manurung, an Indonesian anthropologist; Omara Khan Masoudi, director of the National Museum of Afghanistan; Filipino schoolteacher Randy Halasan; and the Citizens Foundation in Pakistan.

Years back, Wang, a professor at China University of Political Science and Law, helped draft environmental laws for China. But while the laws protecting the environment are in place, his main concern is that they have not been enforced.

Take the example of the Huai River in Jiangsu, China, he said. The river lies between the Yellow River and the Yangtze, the two largest rivers in China.

“In the early 1980s, this was very clean. The people had been used to drinking its water and swimming in it. It had served a lot of functions,” he said.

But within a span of 10 years, the Huai River had significantly deteriorated “that you cannot even use it for any purpose,” he said.

It dawned on Wang that he needed to act and do something out of the confines of the university.

His way of helping

“As a a scholar, I don’t have the power to enforce the law. But I can help pollution victims to file lawsuits in courts and pressure enterprises to comply with environmental laws,” Wang said.

In 1994, a group of farmers from Huanzhu province went to him for help. Roughly 4,000 ducks they had raised had died due to illegal discharges of wastewater coming from two factories.

By themselves, the farmers asked the companies to pay them damages. Despite their efforts, the owners of the factories refused. “They don’t have the money and the expertise to file the case in court,” Wang said.

Some of the farmers were so poor, they had no money to pay their loans in the bank. Cash-strapped, they were also forced to stop their children from going to school.

Wang took the case that would eventually prompt him, four years later, to form a center to serve poor.

The Chinese lawyer won the farmers’ case against the factory owners, helping them recover more than 400,000 renminbi (P2.8 million) in damages.

“I realized that without my help, these pollution victims would not have been able to claim damages,” he said.

At that moment, Wang saw the need to establish an organization that would provide a “systematic way” for helping the victims of pollution. 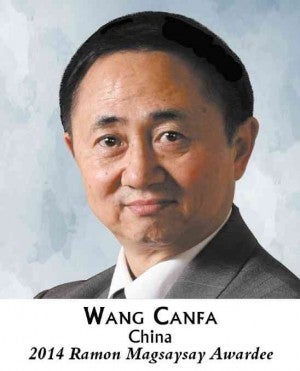 1st center of its kind

CLAPV, the first center of its kind in China, is manned by Wang as its director, a deputy and a pool of volunteer lawyers.

Since 1998, it has handled more than 13,000 environmental complaints, 550 of which were filed in courts. Some were class action suits involving as many as 1,721 plaintiffs.

More than the compensations awarded to victims, Wang’s center has helped deter environmental violations in areas they work in.

Of all the firms he and his group of lawyers had haled to courts, five percent were forced to shut down operations and most were obliged to comply with environmental laws, he said.

“Our clients would recover from their economic losses once they received the compensation after winning the case. Pollution is likewise stopped,” Wang said.

Another big case for Wang was that of the 97 households against a paper manufacturing firm and a chemical engineering company believed responsible for contaminating the Shilianghe River and the farmers’ fishponds next to it.

On behalf of the households, CLAPV pursued and won the case and recovered 5.6 million RMB (P39.7 million) from the owners of the factories.

But it is not all the time that victory is on the side of the poor, as courts often refuse to accept their cases.

“We don’t stop. We align ourselves with the media and disclose the cases as scandals. Our aim is to pressure these enterprises to stop the pollution,” Wang said.

Despite his center’s efforts, Wang believes that more work has yet to be done in dealing with China’s web of laws and regulations, policy shifts and its weak justice system.

Apart from filing lawsuits against erring businesses, Wang and his center have also led training on environmental law for over 1,000 lawyers, judges and other stakeholders.

He and his colleagues have participated in the drafting and review of more than 30 environmental laws and regulations, and in raising awareness of environmental rights through various media.

Wang got his master’s degree in environmental law from Environmental Science Center of Beijing University in 1998.

For his work for the environment, he was named one of Time magazine’s 2007 World Heroes of the Environment.

After a day of hard work at his small law office in a rundown Beijing apartment, the pro bono lawyer gets satisfying rewards. Often, he would receive sincere “thank you” notes from his clients, he said.