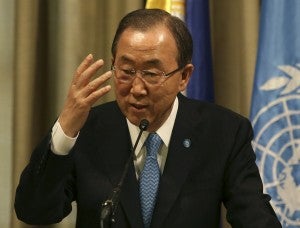 “I call for their immediate and unconditional release as well as action for the scores of peacekeepers from the Philippines who are also affected,” Ban said in Bali, Indonesia.

He said the United Nations would do everything possible to secure the release of the soldiers.

Filipino troops in Area Position 60 were moved to Undof headquarters in Camp Faouar.

The movement, involving seven officers and 51 enlisted personnel, was completed at around 12:30 p.m. Syrian time. Manila is ahead by five hours.

Maj. Gen. Domingo Tutaan Jr., spokesperson for the Armed Forces of the Philippines, said the standoff in Positions 68 and 69 continued but negotiations for an end to the confrontation were in progress.

“The peacekeeping forces were ordered to consolidate their forces,” Tutaan said. Reports from Julie M. Aurelio and AP