Returning Filipinos from West Africa, peacekeepers up for quarantine 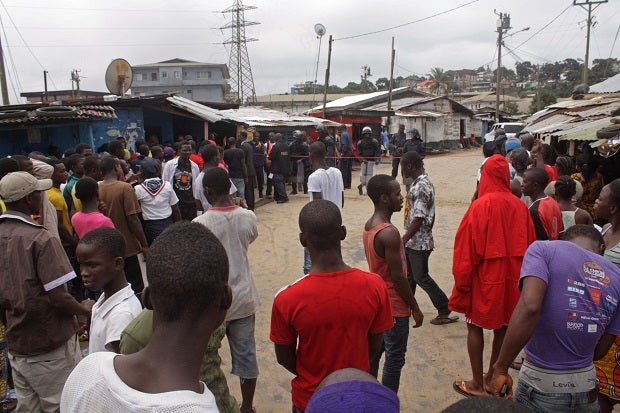 People gather as the await a truck with food stuff from the World Food Programme, WFP, before they enter the West Point area that have been hardest hit by the Ebola virus spreading in Monrovia, Liberia, Monday, Aug. 25, 2014. A Liberian doctor who was among three Africans to receive an experimental Ebola drug has died, the country’s information minister said Monday. AP

MANILA, Philippines—Filipinos returning from West African countries, including the United Nations (UN) peacekeepers in Liberia who are set to return, will possibly have to be quarantined first to ensure they do not have the Ebola Virus Disease (EVD), the Department of Foreign Affairs (DFA) said Tuesday.

“I’m sure there will be protocols to be followed, they might undergo initial preliminary examination there before they come back and once here, I imagine they will be quarantined because the incubation period of the virus is from 2 to 21 days,” DFA spokesman Charles Jose said in a press briefing.

“It would depend on the protocol in the countries where are they coming from and what guidelines would be implemented there. For example if you are exhibiting symptoms you will not be allowed to board an airplane, they might have to stay there for a while to make sure that they don’t have the virus,” Jose said.

There are 880 Filipinos in Guinea, 1,979 Filipinos in Sierra Leone, and 632 Filipinos in Liberia including 148 United Nations peacekeepers who were previously ordered to be brought home.

West Africa is the epicenter of the worst outbreak of Ebola in history with 2,615 total reported cases and more than 1,400 deaths according to the World Health Organization’s latest tally.

The World Health Organization has also confirmed several cases of Ebola in Nigeria where there are around 7,000 Filipinos.

Jose however said that Nigeria has better capabilities to deal with the Ebola outbreak compared to the three others that have problems in containing the virus due to lack of facilities and protective equipment.

“The entire plane load of passenger should be placed in quarantine [when they arrive],” Jose said.

“We don’t have the implementing guidelines yet, so I’m just thinking what possibly could happen. The Department of Health said that because of past experiences we are in a better position to deal with EVD,” he said.