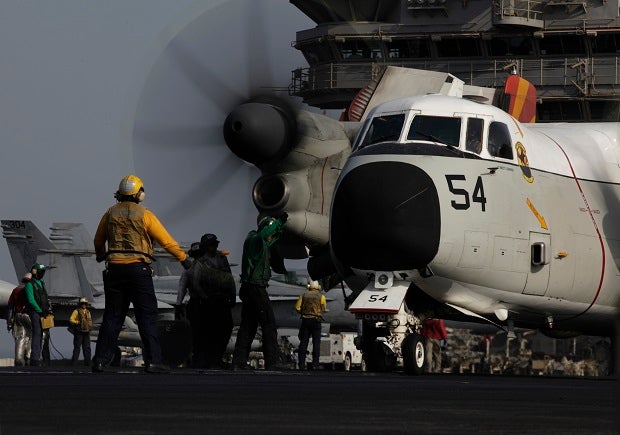 Sailors guide a military plane on the flight deck of the U.S. Navy aircraft carrier USS George H.W. Bush on Sunday, Aug. 10, 2014 in the Persian Gulf. Aircrafts aboard the George H.W. Bush are flying missions over Iraq after U.S. President Barack Obama authorized airstrikes against Islamic militants and food drops for Iraqis trapped by the fighters. AP

MANILA, Philippines—Monitoring Filipinos who could possibly have gone to Iraq or Syria to join the militant group Islamic State in Iraq and Syria (ISIS) is difficult, the Department of Foreign Affairs (DFA) said Tuesday.

“In Iraq and Syria, we already have a total deployment ban for a long time. We don’t let Filipinos leave if that is their destination,” DFA spokesman Charles Jose said in a press conference.

“I imagine how hard it will be to monitor even for [the Bureau of] Immigration because the Filipinos can go to another country [in the Middle East before travelling by land]. Even for the Philippine Embassy in Baghdad, how can it monitor Filipinos that are up in the mountains unless they have their passport renewed?” he said.

Former President Fidel Ramos and Davao City Mayor Rodrigo Duterte recently revealed that about a hundred Filipinos have allegedly left the country to join the extremist group in the Middle East.

The Armed Forces of the Philippines (AFP) however said their intelligence units have not monitored any Filipinos joining ISIS.

“We have taken note of the AFP statement that they don’t have verified reports and we have nothing to add to their statement,” Jose said.

“We also don’t have information on ISIS members coming into the country,” he said. “If they are part of a known terrorist group that has been blacklisted, then when they pass through immigration it will raise a red flag.”

ISIS has gained control over a large part of territory in Syria and Iraq and has declared their own caliphate, prompting many countries to label it as a foreign terrorist organization.

The United States (US) has ordered air strikes against ISIS militants in order to help the Iraqi and Syrian militaries to fight back and gain control of their territory.

Threat of ISIS not in PH, says AFP