The journey of Pio Candelaria 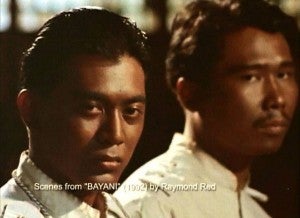 Pio Candelaria was known as a very private person.

But he lived, survived, thrived in a public realm, in Filipino theater, in Filipino America, in a community of artists and advocates, friends and acquaintances who celebrated his journey as a theater artist, writer, cultural activist, master chef, painter, actor, filmmaker, friend.

On the morning of August 17, Pio went to San Francisco General Hospital and admitted himself. He died of a heart attack the same day. He was 54.

In a way, he died alone, away from his family, having spent nearly two decades striving, struggling to create a life in the US. But in death, the community he served and honored in his simple, quiet way embraced him, celebrated his life.

Pio grew up in Catanduanes. In the 1980s he joined the Philippine Educational Theater Association, or Peta, becoming part of the famous theater company’s major productions as a stage designer, actor and writer.

He was part of the Peta production “Panata sa Kalayaan” that toured Asia in the late 1980s. He acted in Raymond Red’s “Bayani” and in many other plays, including “Katas ng Saudi.”

He really wanted to pursue his artistic aspirations in the US, his friends recalled.

But he knew it would not be easy. The plight of the immigrant was something he explored in his art.

“In observing nature, I have come to view migration as intrinsic to survival,” Pio wrote in his artist statement for an exhibit in San Francisco. “Birds, for instance, freely roam the earth to find food. Why then must people simply seeking a better life be restricted in movement by governments and other bodies? We share this planet and its resources, after all.”

Pio struggled for years, wrestling constantly with uncertainty and obstacles. But he kept on going, pushing forward. In fact, his friend, film critic and cultural activist Mauro Feria, said at the memorial service at the Bayanihan Community Center on the South of Market Neighborhood in San Francisco, “Despite the adversity in his life, he was able to accomplish a lot.”

Some of his accomplishments are now part of Filipino American cultural life in the San Francisco Bay Area.

Each year during the Christmas season, children and their parents gather at the Bayanihan Center to make parols. Pio was one of those who came up with the idea for an annual parol festival.

Not far from the Bayanihan Center is Bindlestiff Studio, the Filipino American theater company, where Pio also became regular, acting, helping with stage design and writing songs. When the play “PeregriNasyon” was staged in Hawaii, Pio was part of the cast.

His biggest dream was to be a filmmaker, Mauro Feria said. He helped start a small film production company called The Filament, which produced documentaries, including “Manila Bayou,” about the Filipino community in Louisiana. Another documentary, “Dance Every Sunday Afternoon,” was about Filipino seniors in San Francisco’s Mission district who spent their Sundays dancing at a local club.

“He was doing a lot of things, from painting to acting to cooking,” Mauro Feria continued.

He took courses in the arts, including in painting at the San Francisco Arts Institute and completed a two-year culinary course at the City College of San Francisco.

In fact, Pio had begun to branch out from theater to the art of cooking. Pio had recently launched a new career as a pastry chef, and he worked as a volunteer at the Centro de Latino in San Francisco, helping serve meals to seniors.

Somehow, he found time to serve as a board member of the Filipino American council and was also a volunteer at the South of Market Community Action Network.

He had many ideas and plans at the time of his death.

“Pio wanted to also start a kitchen program for the youth were he would teach them basic skills to work in the kitchen, etc., so the youth can apply for work in the many restaurants that is around the downtown area,” his friend, community advocate Angelica Cabande said.

He was still working on the curriculum when he passed away. He was planning to do so many things.

“The Pio I know is a person that had no limits,” another friend, Alex Torres, recalled. “There were so many things in front of him that were preventing him from doing things. In the end, he would find a way.”