Filipino in Togo has flu, not Ebola virus 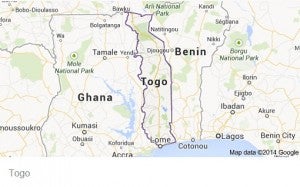 MANILA, Philippines—The Department of Foreign Affairs (DFA) confirmed on Saturday that the Filipino sailor under quarantine in Togo has tested negative for the Ebola virus.

“Our embassy in Nigeria reported that the test on the Filipino national yielded a negative result for Ebola. He was diagnosed with the flu,” Charles Jose, spokesperson for the DFA, said in a text message.

The DFA, meanwhile, has advised Filipinos overseas who may exhibit Ebola-like symptoms to go immediately to the nearest hospital for tests and treatment.

“Our embassies are ready to extend the appropriate assistance,” Jose said.

Earlier, Jose said the Philippine Embassy in Nigeria was closely coordinating with officials of Togo, a West African country, on the testing of the Filipino seamen for the Ebola virus.

Jose said the 32-year-old seaman who arrived in Lome, the capital of Togo, on a ship from Cameroon and Nigeria had shown Ebola symptoms.

Crisis alert level 2 has been raised by the DFA in three West African states hit hardest by the Ebola epidemic—Sierra Leone, Guinea and Liberia.

The alert level resulted in a temporary deployment ban of new workers to the three countries. Only those with existing labor contracts are allowed to return to their employment.

According to the DFA records, 880 Filipinos live and work in Guinea, 632 in Liberia, including 148 Filipino peacekeepers, and 1,979 in Sierra Leone.

The spread of the deadly Ebola virus is being feared across the globe after the death toll in West Africa has risen to 1,427, according to the World Health Organization.

No official report yet on Filipino suspected of Ebola in Togo