21st Pistahan brings out the Filipino in San Francisco 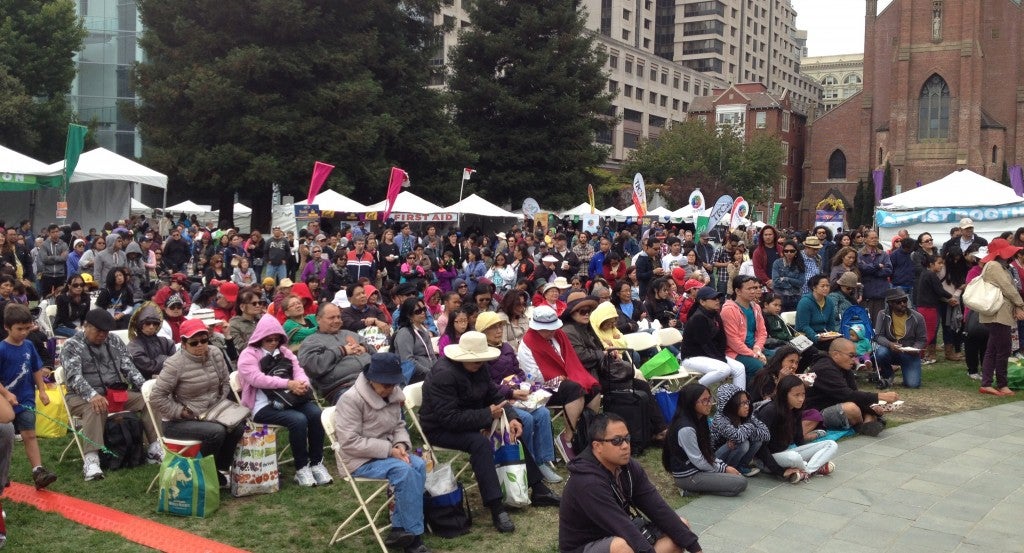 Filipinos turn out in droves for two days of festivities Filipino-style. PHOTO BY JUN NUCUM

Divided into clusters of the three main islands of Luzon, Visayas and Mindanao, some 70 contingents from different organizations, the biggest in recent years, displayed not just their colorful attires and indigenous dances, but also their wide smiles and enthusiasm as thousands other kababayan lined up Market Street to cheer the marchers on.

Also featured in the parade were some 10 artistically crafted floats, notably that from the Department of Tourism, which trumpeted its now very familiar slogan, “It’s more Fun in the Philippines,” and the much-awaited float of The Filipino Channel (TFC), currently celebrating its 20th anniversary, which featured ABS-CBN artists led by “Mr. Pure Energy” himself, Gary Valenciano and Karylle who performed on the last day of the Pistahan.

Filipino American Arts Exposition (FAAE) President Al Perez told INQUIRER.net that was beside himself with excitement on the number of parade participants as the phenomenal celebration unfolded before his eyes.

Perez paid tribute to Pistahan’s “really good solid planning committee composed of very dedicated, committed volunteers who put everything that they can towards the planning to make sure of its success.”

“On this 21st year of the Pistahan, we had more exhibitors from the Motherland, which is very encouraging because we wanted to showcase authentic Filipino culture, Filipino heritage and of course it comes with products, arts and crafts materials,” Perez explained. “Since there is not many of them here in San Francisco, we have to invite them from the Philippines and a lot of them responded to the call of duty.” 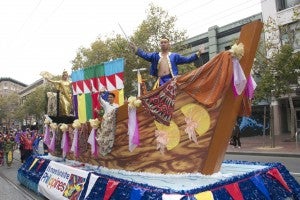 Colorful Department of Tourism float ahead of a costumed marchers. PHOTO BY MANDY CHAVEZ

The exhibitors, both local and from the Philippines, filled up the booths in the heritage, art, first aid/health, dance, culinary, dance, martial arts and wine-tasting pavilions.

In an afternoon program, San Francisco Mayor Edward Lee led other city officials and guests in the observance of Filipino pride, with messages saluting both the Filipinos in attendance and the tireless efforts of the organizers. The mayor proclaimed the first day of the festivities as Pistahan Festival Celebration Day in San Francisco.

In his brief speech, Mayor Lee recounted his recent visit to Manila, which he called “a wonderful trip as we were treated so well.”

“We had the (Manila Mayor Joseph Estrada) to hold for us a very nice dinner where he sang ‘I Left My Heart in San Francisco.’ Can you imagine the Manila mayor singing that song for the mayor of San Francisco? That is pretty special,” an amused Lee recalled.

Lee later acknowledged Pistahan’s Viva Visayas theme for this year to help the people of the Visayan region, which was devastated by a series of calamities, namely, the earthquake in Bohol and Cebu and the powerful typhoon Haiyan (Yolanda) that left many dead victims and homeless survivors.

The festival theme, Hermana Mayor Olivia de Jesus of ABS-CBN TFC later pointed out, was also aimed at honoring the resilience of the Visayans and their efforts to serve as catalyst for the rebirth, renewal and rebuilding of the region after the devastations.

Lee also did not forget to thank Filipinos for working with him in running the affairs of the city, notably his education adviser Hydra Mendoza who introduced him onstage after she urged all Filipinos to seize the moment “to shine and show how rich the (Filipino) culture we have is and to really make sure that we are the Filipinos here in Northern California.”

“I am really proud to be in the Board of Education in San Francisco because as we all know, education is a turning point for all of us. And as the only elected Filipina here in San Francisco, (let me reiterate that) it is our responsibility to make sure that we get ourkids well-educated, off to college and get a job,” Mendoza asserted. 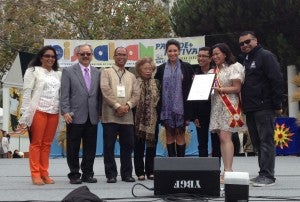 For his part, barong-clad Board of Supervisors President David Chiu also thanked all Filipinos for being part of the “amazing richness and diversity in San Francisco and working together with the Board of supervisors and our mayor.”

“This year, Tagalog is now the third official language (after Chinese and Spanish) of our city because of all of you. I want to thank you for all the work we are doing together to make sure that our city is thriving and we are an incredible Filipino-American city here in San Francisco,” Chiu told the crowd.

The certification of Tagalog, as covered under the City’s Language Access Ordinance, made it mandatory for city departments that interact with the public to provide Tagalog-translated materials and Tagalog interpreters at public meetings and other services.

Representing Consul-General Henry S. Bensurto Jr, deputy Consul General Jaime Ramon Ascalon reminded qualified overseas Filipino to register in the consulate’s overseas absentee voter’s (OAV) booth to be able to participate in the coming 2016 national election. Ascalon also announced that ballots will be mailed to registered voters so they would not have to go to the consulate to cast their votes.

In an interview later, Ascalon praised the volunteers composed mostly of second and third generation Filipino-Americans who are working very hard, committed to promoting their culture, the Filipino pride and creativity.

“For me Pistahan is a major success not only as a festival based on the attendance, but also in mobilizing the young members of the Filipino-American community in not only making them aware, but also in being involved. That alone is a good start for them in involvement in other future projects,” Ascalon observed.

Parade marshal, former MSNBC anchor/host of “Early Today Show” and current KPIX/KBCW Channel 5 CBS and CW 10 Night Beat anchor Veronica de la Cruz talked about her childhood being a first-generation American growing up in a house that always smelled of adobo, who did not really understand then the value of being a Filipino and a Filipino-American.

“As I grew older, I learned to embrace my culture and tradition and grow up in the amazing family,” de la Cruz divulged. “I know now how lucky I am and how special we all are. So to the younger generation, make sure that you hang on to that tradition, and pass that down to the future generations because without that, what do we have?”

De la Cruz’s mother was 4th of 18 children back in the Philippines, and she got used to having big family gatherings.