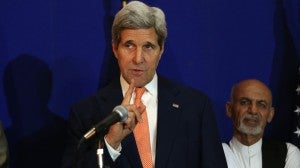 NAYPYITAW, Myanmar – U.S. Secretary of State John Kerry tried Sunday to calm the brewing storm over territorial disputes in Asian waters, appealing to China and its neighbors to settle their differences and ease tensions.

Kerry said at a meeting of the Association of Southeast Asian Nations that it was not enough to keep working on a long-delayed code of conduct for the South China Sea, where many nations have competing claims.

“We think the urgency of developments means that it is not enough simply to wait for that solution to arrive,” Kerry said. “Obvious dangers arise during waiting time. The claimants need to take steps now to lower the temperature.”

Kerry added that the U.S. believes “the obligation to clarify claims in keeping with international law applies to all claimants, not just China.”

America’s top diplomat also said he had raised with Myanmar officials a series of reforms that needed to be completed. They include addressing ethnic conflicts and religious intolerance, and establishing guidelines for the role of the country’s military and constitutional reforms with an eye toward elections to be held in 2015.

He said “next year’s election will absolutely be a benchmark moment for the whole world to assess the direction Burma is moving in.”

Kerry said he had invited several Cabinet ministers and lawmakers to Washington for discussions with administration and congressional officials on how best to make the election credible and complete the transition process with democratic reforms.

Kerry then headed to Australia, where he was joining U.S. Defense Secretary Chuck Hagel for talks with government officials.

On the maritime disputes, the Philippines offered an initiative Saturday that incorporated the American concept of a voluntary end to tension-producing activities. The U.S. is calling for a freeze in actions that change the status quo, such as seizing unoccupied islands and land reclamation.

In addition to the immediate voluntary cessation of provocative acts, Manila’s plan calls for the speedy conclusion of the code of conduct as well as long-term arbitration over disputes that would eventually resolve the claims under the U.N. Law of the Sea.

At a news conference Sunday, Kerry told reporters that the U.S. freeze proposal “is a way of actually locking into place the very promises that people have already made.”

Kerry brushed aside Chinese resistance, noting that the U.S. was “very pleased” that ASEAN foreign ministers had included positive language about it in a statement.

Several U.S. officials had said earlier that the ASEAN statement was a setback to China because Beijing would have preferred the subject not be addressed at all.

“I think we made the point that we came to make,” Kerry said.