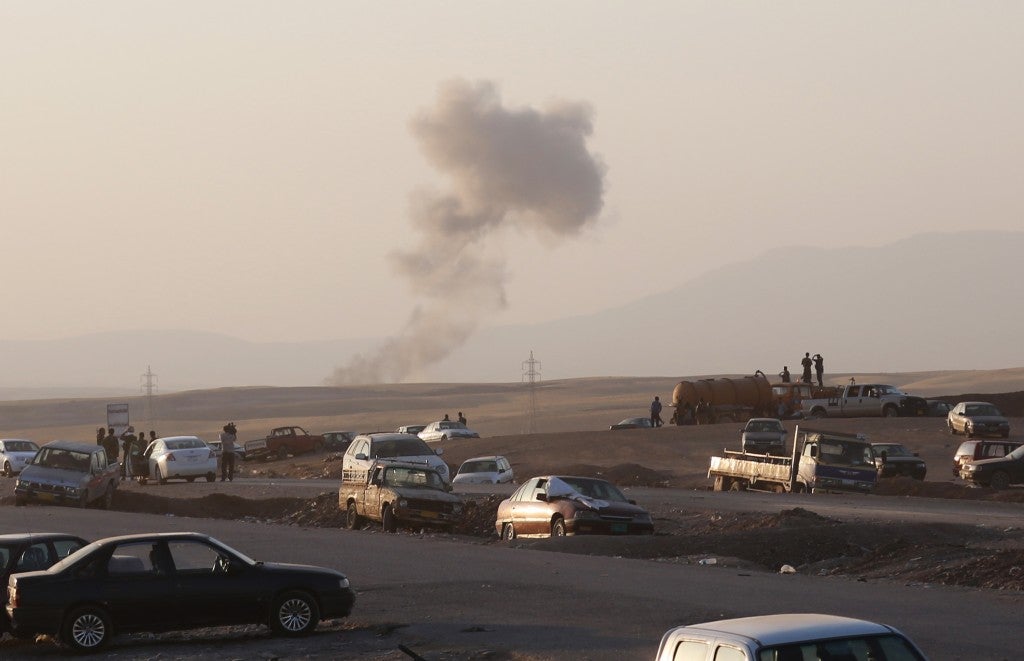 Smoke rises after airstrikes targeting Islamic State militants near the Khazer checkpoint outside of the city of Irbil in northern Iraq, Friday, Aug. 8, 2014. Iraqi Air Force has been carrying out strikes against the militants, and for the first time on Friday, U.S. war planes have directly targeted the extremist Islamic State group, which controls large areas of Syria and Iraq. AP

Philippine authorities are on alert following an increase in the number of Filipinos going to Iraq and Syria to train and fight with the Islamic State of Iraq and the Levant (Isil).

In a report to Executive Secretary Paquito Ochoa Jr., Felizardo Serapio Jr., head of the Law Enforcement and Security Integration Office under Ochoa and executive director of the Philippine Center on Transnational Crime, said that Syria has grown to be an attractive destination for foreign fighters.

Among those lured are Muslim Filipinos.

Labeled confidential, the report has been shared with the Office of the President and other law enforcement organizations, including the Interpol. Ochoa also heads the Antiterrorism Council.

The report points to an emerging trend of Southeast Asians, including Filipinos, being recruited to fight in Syria and other conflict zones in the Middle East.

There is no exact figure on how many Filipinos have joined Isil in Syria and Iraq except that it may be close to 200.

A report from the Department of Foreign Affairs (DFA) dated March 20 this year indicated some 100 Filipinos were monitored to have traveled to Iran and undergone military training before being deployed to Syria.

The DFA also reported that two Filipinos have died for supposedly participating in the conflict. No identities were mentioned in the DFA report dated last July 14 and sent to Ochoa.

An official in Serapio’s office told the Inquirer that one of the two Filipinos found dead with Syrian fighters was raised in Syria by his Filipino mother and a Syrian father (now deceased). The other was carrying a Filipino passport.

“The mother of one of them has been located but has no plans of going back to the Philippines because her husband had left her with a big piece of land,” said the official, who asked not to be identified.

Other reports indicate the presence of other Filipinos in Syria and Iraq. One report was sent to the independently run Philippine Institute for Peace, Violence and Terrorism Research (PIPVTR).

In that report, several “Anak-Ilu” were said to have left Sulu late last year to train and fight with Isil. “Anak-Ilu” is a Tausug word meaning orphans, according to retired Gen. Rodolfo Mendoza, president of PIPVTR.

“These are orphans of members of the Abu Sayyaf and the Moro National Liberation Front whose ages are between 18 and 25,” Mendoza said.

He said members of the group reportedly trained under a Malaysian named Quayyim, an alleged member of the militant group Jemaah Islamiyah. They do not follow orders from Abu Sayyaf or MNLF commanders, according to Mendoza.

“They answer to no one and consider themselves one with the Islamic Caliphate,” he said. “There are no identities mentioned in the report except that one Ninok Sappari, a Tausug from Patikul, Sulu province, is believed to be one of those who was recruited late last year to join fighters in Syria.”

Filipinos who have fought with Isil in Syria and Iraq pose a serious danger to national security because of the possibility that upon returning to the Philippines, they will use their experience to apply what they learned from Isil, Mendoza said.

“To pledge alliance, which a lot of Filipino Muslims are doing now, including some commanders in the Abu Sayyaf, is one thing. To fight side by side with the Syrians and the Iraqis is another matter and it could be a real internal security problem,” Mendoza said.

The Antiterrorism Council has recommended to the executive secretary the creation of a technical working group to create a database for profiling foreign fighters from Southeast Asia, with focus on Filipino fighters.

Text of Obama’s statement on air strikes in Iraq