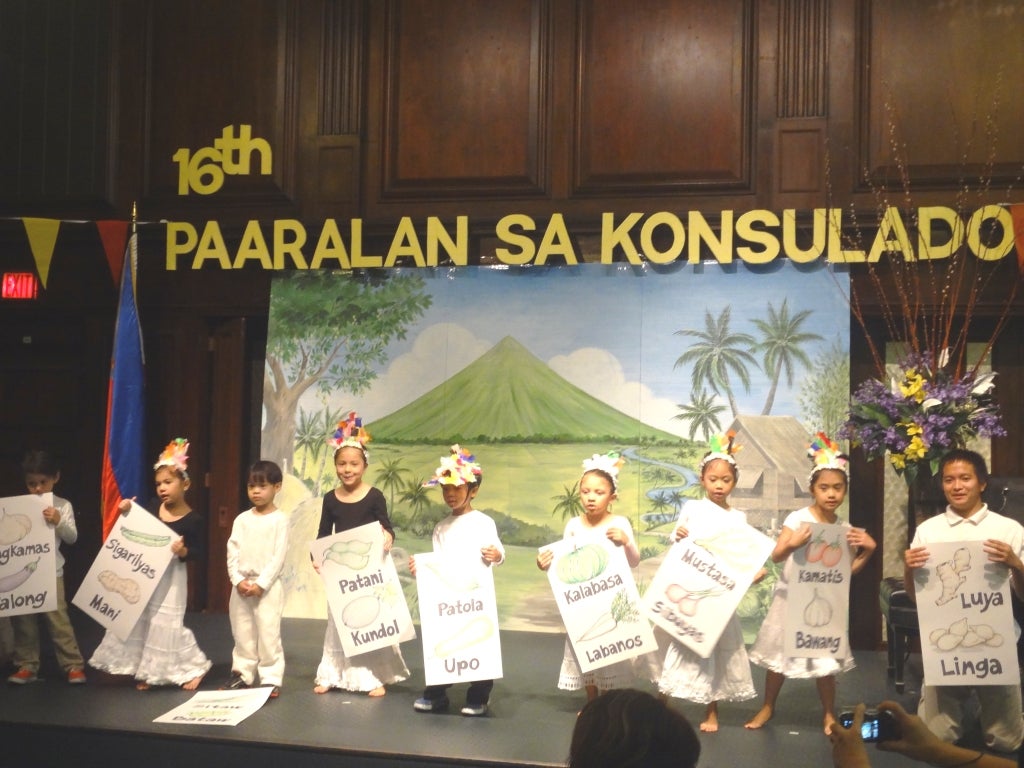 NEW YORK, New York – A spirited group of Filipino-American children born or educated in the United States learned about their Philippine roots, culture and heritage at an annual summer workshop recently held at the Philippine Consulate here.

With the theme “Makatao, Makakalikasan, Makabansa, at MakaDiyos”  (Humane, Environment-Friendly, Patriotic and God-Fearing), Paaralan sa Konsulado is now on its 16th year.

The workshop is hosted by the Philippine Consulate General of New York, through Deputy Consul General Kira Danganan-Azucena and Cultural Affairs Officer Olive Magpile, in collaboration with the Association of Fil-Am Teachers of America (AFTA) Inc.

A special art competition, “Tuklas Talino,” was also held. It was a talent search in the literary and visual arts in the tri-state, with an exhibit of children’s works displayed in the lobby of Philippine Center. 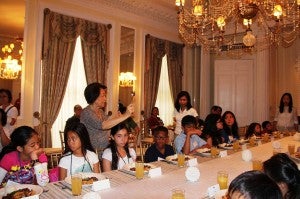 Meanwhile, the parents who waited for their children were also kept busy, either volunteering or joining the morning Zumba exercises.

A new part of the program, a lesson on “Table Manners,” was introduced by Remedios Fe Cabactulan, wife of Ambassador Libran Cabactulan, Permanent Representative to the UN Mission.

The children, with some parents and teachers of AFTA, Inc. were feted to a semi-formal lunch at the Ambassador’s residence, where they were served popular Filipino dishes.

A formal setting on a long banquet table sat about 30 children, while volunteer parents and teachers had separate tables where they watched the presentation.

The elegant dining hall typically caters to dignitaries of the United Nations, with Mrs. Cabactulan heading the UN Delegations Women’s Club. Hosting the children at the official residence became the highlight of the Paaralan workshop this summer.

Cabactulan, who has a master’s in Teaching Health Education and a former principal at Manila’s Araullo High School, stressed the importance of cultivating good habits for children early in their formative years. Parallel to the theme of “MakaDiyos” (God-fearing), she encouraged families to pray and be thankful for the graces they receive.

She reminded the children to wash their hands before meals for hygiene, and to keep a positive conversation going. Parents were advised to keep dinner time a family event, an opportunity to learn about what’s happening in school, know their children’s playmates and keep the children engaged even when they are invited to their grandparents’ homes or other parties.

Another unique experience of the children this year involved lessons in Mindanao ancestral culture, such as learning how to play the “kulintang” brass-made gongs and ancient martial arts from the Southern part of the Philippines. The session was co-sponsored by Kinding Sindaw Melayu Heritage and its founder, lawyer Potri Ranka Manis. 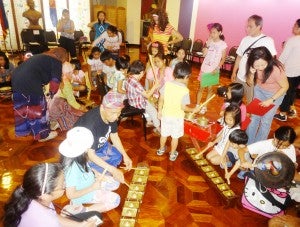 Children ages 4 to 16 were ecstatic about discovering their ancestral roots and experiencing the vibrant songs and folk dances. East Emmanuel, 4, started watching YouTube videos of Philippine nursery rhymes to supplement what he learned at Paaralan.

Samuel Merritt, 14, and his brother Logan, 13, have been at the Paaralan for the past eight years and continue to enjoy meeting new friends from the Fil-Am generation. Kevin Williams, 9, likewise loves the camaraderie. He won the perfect attendance award and promises to be back next year.

At the end of five Saturdays, a culminating program presented song and dance numbers by the students in three separate age groups, emceed by past students and volunteers Samuel Merrit and Nica Garana.

Garbed in Filipino attire, the youngsters overcame their American accent to speak in Tagalog. The children showed a skit where they practiced their conversational Filipino and demonstrated  different native games they learned, like “sungka,””sipa” and “holen.” They sang famous nursery rhymes, such as “Bahay Kubo,” “Paa, Ulo,” and presented regional dance numbers, including “Tinulabong” from the Mountain Province, ”Sua-ku-sua” and “Habanera.”

As the summer’s session concluded with the recognition of all the teachers and volunteers, AFTA Inc. president Dr. Raul Cajigas announced the Silver Jubilee celebration of AFTA, the oldest Fil-Am teachers association in America on Sunday, October 12, 2014 at Astoria Manor Hotel.

The next workshop is slated for summer of 2015. Consul General Mario de Leon Jr. suggested innovations in the program that will introduce Philippine National holidays, the relevance of our national hero, Jose Rizal, and symbols of our family traditions, like our famous “parol” (Christmas lantern).