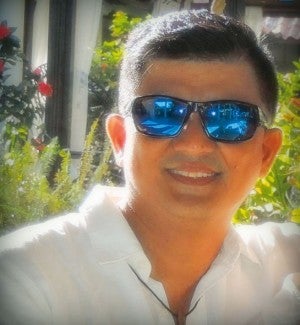 • Among 169 teachers from PH recruited by the city

NEW YORK, New York — A Filipino mathematics teacher based in Queens recently received praise from a local newspaper for inspiring and engaging students with unconventional but effective teaching methods.

The New York Daily News lauded Ramil Buenaventura, a seventh and eighth grade teacher at Renaissance Charter School in Jackson Heights, for being an engaging educator who “connects with his students by incorporating rapping, dancing and movies in the math curriculum.”

Buenaventura, 44, immigrated to the United States about a decade ago. He told the Daily News that helping his students achieve their full potential through his crafty method of teaching is his way of giving back to America.

“By teaching, I can contribute to this country,” Buenaventura told the Daily News. “I want to give back to the students, because I’m living the American dream,” he added.

Buenaventura’s work led to his nomination for the “Hometown Heroes in Education” award. “For his inspiring life story and energetic, creative approach to teaching, which has changed the lives of his students, the seventh- and eighth-grade teacher at Renaissance Charter School in Jackson Heights is nominated for a Hometown Heroes in Education award,” the Daily News wrote.

The “Hometown Heroes in Education” award is organized by the Daily News to honor teachers and educators “for their good deeds, which often go unnoticed.” The awards body recognizes school workers who demonstrate unwavering “generosity, compassion, dedication, selflessness, and ingenuity.” 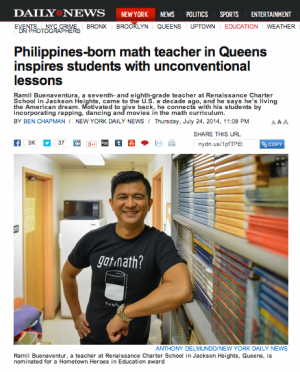 The Philippine-born math teacher grew up in Manila, where he earned his master’s degree and taught for about 13 years. On a teacher’s salary, Buenaventura realized it was difficult to support his family in Manila. So, he decided to take his chance and pursue a career abroad.

Answering an ad posted on a newspaper in Manila, Buenaventura applied for an international teaching post. After doing well in the recruitment interview, he was offered a job in New York City.

Buenaventura called it a life-changing opportunity. As a rookie teacher in New York, he earned a salary that was six times as much as he made back home in Manila. “I feel like I won the lottery. It changed my life,” Buenaventura told the Daily News.

Buenaventura started teaching at Intermediate School 192, a high-needs school in Queens. There, he discovered that the “relatively informal culture” of US classrooms suited his engaging teaching style. He taught math at IS 192 for four years.

Buenaventura then taught at Renaissance Charter School, where his classes began to draw students eager to see him teach his lessons. His teaching methods include singing, dancing, making movies and basically anything he can do to make his students—mostly immigrants like himself—connect better to algebra lessons.

“My style is to connect with the students: I am your friend and I am your teacher,” Buenaventura told the Daily News. “In my class you see me rapping, singing, dancing on the tables—I even made a music video about math to grab their attention.” 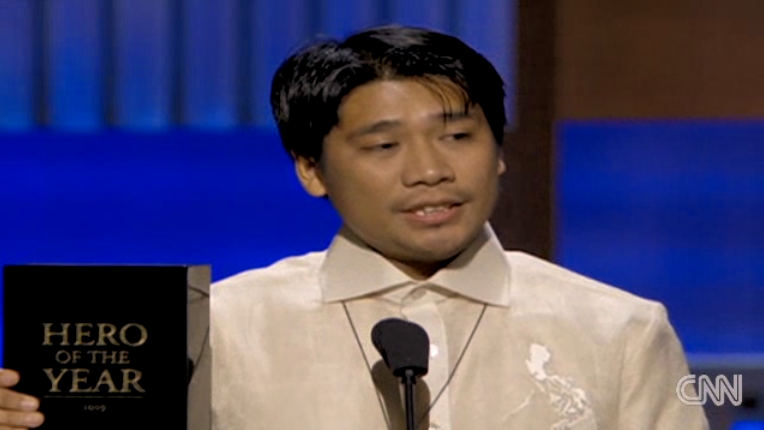