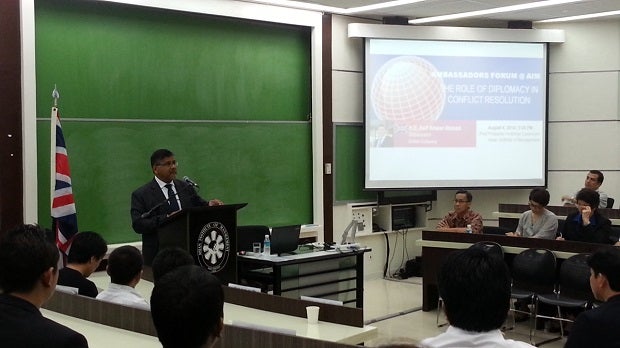 British Ambassador Asif Ahmad speaking before students, media, and members of the diplomatic community in a forum about the role of diplomacy in conflict resolution. MATIKAS SANTOS/INQUIRER.net

MANILA, Philippines—China should return to the path of peaceful economic progress and shun military aggression if it wants to continue to be respected as a global power that can be a balance in Asia against the United States (US), the British Ambassador said in a forum Monday.

British Ambassador Asif Ahmad also said that China must stop ignoring the calls for it to participate in diplomatic processes such as the arbitration case before the International Tribunal on the Law of the Sea (ITLOS).

“But what has become an inevitable result of [China’s militarization], is people are wondering what the real intention of China is,” he said in the forum that focused on diplomacy as a tool in conflict resolution.

Philippines and China are locked in a maritime dispute over the West Philippine Sea (South China Sea) with the Philippines filing for arbitration challenging China’s nine-dash line claim that covers nearly 90 percent of the South China Sea.

Chinese ships have maintained control of the waters around Spratly Islands, Scarborough Shoal off the coast of Zambales and have previously used water cannons against Filipino fishermen to force them out of the area.

Land reclamation activities in several reefs are also being conducted by China as seen in a series of aerial reconnaissance photographs released by the Department of Foreign Affairs (DFA).

China is also ranked second in the world in terms of military expenditure following the US, according to a 2013 study by the Stockholm International Peace and Research Institute (SIPRI).

“We are not against any country arming itself for defense purposes. The issue is intent and use, and you can use those … for peaceful purposes, for genuine self defense, and for international emergencies,” Ahmad said.

He however expressed fear that there will be an accident amid the heightened tensions in the South China Sea that would lead to open conflict.

“My fear that an accident or an incident will escalate into something that will lead governments to take action that will irrevocably destroy the peace and security of this region. That is something that we do not accept,” Ahmad said.

“If one is to draw some conclusions from all of the wars between countries since 1947, there are two thoughts that are clear to me. Firstly, wars begin when diplomacy fails and secondly, wars end when diplomacy begins,” he said.