In the Know: 3 papal visits in span of 25 years 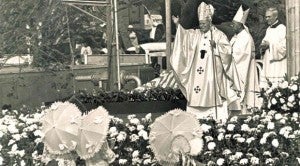 PAPAL BLESSING Pope John Paul II celebrates Holy Mass to mark the close of World Youth Day during his second visit to the Philippines on Jan. 14, 1995. The crowd of 4 million who attended the Mass on the Philippine International Convention Center grounds was the biggest gathering in the Pontiff’s 16-year reign. Behind the Pope is Manila Archbishop Jaime Cardinal Sin. The Inquirer has color enhanced the black-and-white photo taken by the late Inquirer photographer Roger Margallo.

MANILA, Philippines–From 1970 to 1995, there were three papal visits to the Philippines, Asia’s only Christian country where 80 percent of the population is Roman Catholic.

The first Pope to visit the country was Paul VI—from Nov. 27 to 29, 1970. He survived an assassination attempt by a Bolivian painter.

The first day of his visit included a tour of Nayong Pilipino and a liturgical reception at Manila Cathedral.

He blessed the image of the Nuestra Señora de Guia, the oldest venerated Marian image in the country, which is enshrined in Ermita.

On the second day, he visited the pontifical University of Santo Tomas (UST), where he addressed some 400,000 students. He then said Mass at Rizal Park attended by Asian cardinals. The event was highlighted by the first communion of some 187 boys and girls from all over Asia.

He celebrated his third Mass on Nov. 29, 1970, at Quezon Memorial Circle in Quezon City. Later, he was driven to the newly inaugurated Radio Veritas, where he broadcast his message to the members of the press. He thanked them and acknowledged their role as “agents of social communication.”

He went on a motorcade on his way to a low-cost housing project for the poor in Pasig City, then to the slums of Tondo in Manila.

Paul VI, who reigned from 1963 to 1978, promulgated the reforms of the Second Vatican Council, which St. John XXIII called in 1962, and issued the controversial encyclical “Humanae Vitae,” reaffirming the Church’s teaching against abortion and contraception.

The next Pope to visit the Philippines was John Paul II, who reigned from 1978 to 2005.

John Paul II visited the Philippines twice—in February 1981, when he beatified the first Filipino martyr, Lorenzo Ruiz, and in January 1995, when an estimated 4 million Filipinos attended the Mass he celebrated at the close of World Youth Day.

Ahead of the Pope’s visit on Feb. 17, 1981, then President Ferdinand Marcos declared that he had “lifted” martial law. On this visit, his agenda included a celebration of Mass at Manila Cathedral.

The Pope also visited Our Lady of Perpetual Help Church in Baclaran where he met with religious women, and the archbishop’s residence, Villa San Miguel, where he met with the Philippine Episcopate and Asian bishops.

The Pope then delivered a message at Araneta Coliseum in Quezon City and addressed the Filipino youth at UST and the poor in Tondo. He later proceeded to Manila’s Rizal Park where he beatified Lorenzo Ruiz and other martyrs who were persecuted in Japan in the 17th century.

John Paul II went to Cebu City to meet with priests and seminarians, celebrated Mass in Davao City before meeting with representatives of the Muslim community at the Davao airport and visited a refugee camp in Morong, Bataan province.

The five-day visit was the Pope’s first overseas trip after he underwent an artificial bone implant in the leg following a hip injury in April 1994.

During this visit, he met with then President Fidel Ramos in Malacañang and later celebrated Mass for the 233 delegates of the International Youth Forum at UST’s Central Seminary Chapel.

On Jan. 15, 1995, a Sunday, the Pope arrived at Malacañang Park aboard the popemobile from the Apostolic Nunciature on Taft Avenue, but was forced to ride the presidential helicopter along with Cardinal Sin and Papal Nuncio Gian Vincenzo Moreni to get to Quirino Grandstand because of the huge crowd on the streets.

At past 10 in the morning, the Pope began the three-and-a-half-hour Mass that marked the closing of World Youth Day. Attended by 4 million people, it was the biggest gathering in the Pontiff’s 16-year reign.