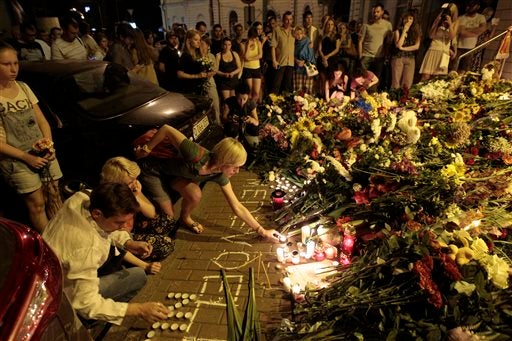 The downing of a Malaysia Airlines passenger jet with 298 people aboard heaped new distress on a nation still stung by the trauma and global stigma of Flight MH370’s disappearance four months ago.

For the second time this year, Malaysians awoke on Friday to grim news of yet another air disaster that left dozens of their countrymen dead or missing, and linking their nation once again to a dreadful tragedy.

“Why is there no peace of mind in our country? Tragedy after tragedy is happening to us,” said G. Subramaniam, whose son was aboard MH370.

Malaysia Airlines Flight MH17 was flying from Amsterdam to Kuala Lumpur when it came down late Thursday over eastern Ukraine. Forty-three Malaysians were aboard.

US officials said it was shot down by a surface-to-air missile, a possible casualty of a violent rebellion in the area by pro-Russia insurgents.

While exact responsibility for the crash remains to be established, the new crisis is tearing open festering wounds in the Malaysian psyche caused by MH370.

“Just heard the terrible news. I don’t think we are ready to accept this so soon after (the) MH370 tragedy,” badminton ace Lee Chong Wei, the country’s top sporting star, said on Twitter, one of countless Malaysians to vent renewed anguish on social media following the latest crash.

With MH370, Malaysians watched in dismay as their government and a flagship national brand came under heavy international criticism for their inability to explain what happened to the plane.

It mysteriously diverted off its Kuala Lumpur-Beijing route on March 8 with 239 passengers and crew, and is now believed to have crashed in a remote part of the Indian Ocean, though no trace has been found.

Relatives of passengers onboard have alleged Malaysian incompetence and a cover-up, Malaysia Airlines bookings have plummeted, and the country has become the butt of grim jokes worldwide.

The twin tragedies are destroying Malaysians’ sense of their multicultural country as a bastion of stability and prosperity in an often turbulent Southeast Asia, said Ibrahim Suffian, head of Malaysia’s leading polling firm.

“Malaysians have always felt shielded from calamity and tragedy. Typhoons, earthquakes, wars—it’s always not us, but Indonesia, Burma or the Philippines. But that sense of security is now shattered,” he said.

MH17 is especially painful for Muslim-majority Malaysia as it comes during the fasting month of Ramadan, a time of joyful family gatherings that culminates later this month with Eid al-Fitr, Islam’s biggest festival.

Already fresh questions are being asked of Malaysia, particularly why the state carrier was flying over an active war zone.

Prime Minister Najib Razak, who lamented after MH17’s crash that 2014 had been “a tragic year for Malaysia,” defended the airline, saying the flight path was deemed safe by international air authorities, though Malaysia Airlines said on Friday it would no longer fly the route.

Some believe MH17 will do further damage globally to Malaysia’s image.

“Their sense of pride and well-being (was) already dented by the handling of MH370 by the country’s leadership and the airline’s management, … they will be hard pressed to live down this one, feeling accused and held (unfairly) responsible, not knowing how best to express themselves and be free of taint,” said K. S. Narendran, an Indian citizen whose wife was aboard MH370.

Fears have also emerged of a damaging impact on Malaysia’s important tourist sector: Visitors from China, a key source of arrivals, dropped 20 percent in April, according to the latest Malaysian figures.

Two-third of MH370’s passengers were Chinese nationals. There also were 38 Malaysians aboard.

“Now there’s this plane crash, we would be very unlikely consider resuming it in the future,” said the manager of its public relations department, who only gave her surname, Zhang.

“It’s just hard to imagine that they could have even survived the first incident,” he said.

Hit by two astonishing tragedies in quick succession, the Malaysia Airlines brand may become the airline industry’s equivalent of asbestos or News of the World: Toxic to the public and, experts say, impossible to redeem.

“I can’t comprehend of anything they can do to save themselves,” said Mohshin Aziz, an aviation analyst at Maybank in Kuala Lumpur.

Even before the Flight 370 mystery, state-owned Malaysia Airlines was in serious financial trouble. The airline has been in the red for the last three years. Last year, its losses ballooned to 1.17-billion ringgit ($363 million), nearly three times larger than its 433-million ringgit loss in 2012.

Already losing about $1.6 million a day, there will be “no miracles” for Malaysia Airlines, said Aziz.

As a state-owned flag carrier, it is required to fly unprofitable domestic routes, and its strong union has resisted operational changes.

For air travelers in Asia, who have a multitude of options thanks to a budget airline boom, the latest incident will make the Malaysian carrier even less attractive.

Josh Gokul, a 25-year-old Australian student on a layover at Incheon, said he had flown with Malaysia Airlines before and its service was “fantastic.”

But he is now “very hesitant” about using the airline. “Flying is scary enough.”

For some travelers, the airline’s poor financial health is more concerning for the future than the two disasters.

“Last time I saw them, the plane was almost empty and so I suspect, probably losing a lot of money,” said tourist Ricky Leong as he checked in for a Malaysia Airlines flight from Hong Kong to Kuala Lumpur. “They’re not going to maintain their fleet and there’s going to be issues in the future.” Reports from AFP and AP

Flight steward not supposed to be on flight MH17