New parks open in SF neighborhood with many Filipinos 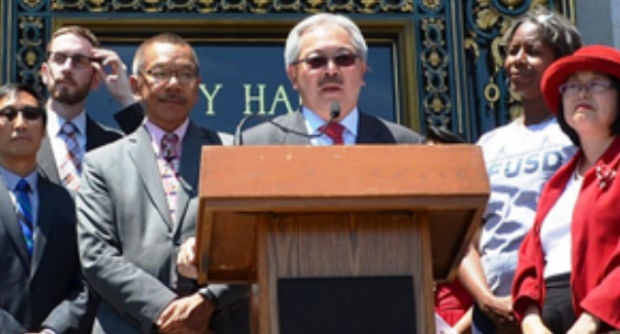 The South of Market (SoMa) West Improvement projects include the newly opened skate park and dog park. A new public plaza at McCoppin Hub also is set to open in August.

“I am so pleased to now be able to walk down Valencia Street and see folks sunning on benches as their ecstatic dogs play in the dog park,” said neighborhood resident Lynn Valente.

“I’m able to chat with neighbors I have never met before and watch athletes of all ages perform amazing feats in the skate park. Both the skate park and dog park have replaced blight and desolation with energizing urban activity,” Valente added.

The transformation and opening of these new spaces in the South of Market neighborhood is an “investment in our families and our youth,” said Mayor Edwin Lee.

The SoMa West Improvement projects are examples, he said, of smart planning supported by the community.

The city dedicated the revenue from the sale of the 22 parcels for various transportation projects including the implementation of the SoMa West Improvement projects, to mitigate the impact of the new Central Freeway touchdown at Market Street and Octavia Boulevard.

Through a series of public workshops with the community, the Office of Economic and Workforce Development and Department of Public Works tapped a common vision for improvements to the public areas.

The selected improvements were designed to enhance the public’s experience with beautification, create open space and improve the usefulness and flow of Octavia Boulevard.

Pedestrian and transportation safety features such as colored and textured asphalt, raised crosswalks, the installation of chicanes to narrow the roadways, streetscape improvements and landscaping were among the improvements.

The total construction cost of the SoMa West Improvement projects is $9.3 million, and include:

The space is owned by Caltrans and through a negotiated lease agreement; the City was able to transform this space into a play area for pet owners and dogs alike.

·         Skate Park: East of the dog play area is a new 72,000 square feet skate park. The space is owned by Caltrans and through a negotiated lease agreement, the City was able to transform and activate the underutilized and blighted land into a place for skateboarding. New Line Skateparks, one of the world’s leading design and construction firms specializing in skate parks, designed the new skate park.

·         McCoppin Hub Plaza: Located at McCoppin and Valencia Streets, this cul-de-sac is being transformed into a new plaza for families to enjoy. It was designed by the Architecture firm Boor Bridges and the Department of Public Works to revitalize and enliven and increasing security through activity and use. The plaza will serve as a community gathering hub for hosting music, food and cultural events starting in August. For more information on the activities, go to: www.peopleinplazas.org.

The mural located at the skate park is titled “There Slipped Saturn A Perpetual Tock – a.k.a. The Saturn Clock” by local artist Jovi Schnell and a large-scale sculpture is titled “Handsignals” by MoreLab located at McCoppin Hub Plaza.