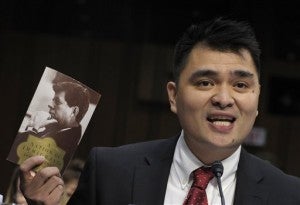 McALLEN, Texas — Prominent Phillipines-born immigration activist and Pulitzer Prize-winning journalist Jose Antonio Vargas, who has lived and worked in the U.S. for years without legal documentation, was detained Tuesday by U.S. Border Patrol agents at a South Texas airport.

Border Patrol spokesman Omar Zamora said Vargas was in custody, but he had no other details about the case.

Vargas had been in McAllen, a city along the Mexico border, for several days as part of a vigil drawing attention to the plight of unaccompanied immigrant children and families coming into the U.S. illegally. At the city’s airport, near the border, Border Patrol agents stand beside Transportation Security Administration agents to check documentation, even for domestic flights.

On Tuesday morning, Vargas tweeted: “About to go thru security at McAllen Airport. I don’t know what’s going to happen.”

His spokeswoman, Maria Cruz Lee, declined immediate comment. She said a statement would be issued later in the day.

The security situation at the McAllen airport — and elsewhere in the city — is familiar to the thousands of people living illegally in the U.S. along the Texas-Mexico border. Along highways out of the city, drivers are stopped at Border Patrol checkpoints about an hour’s drive north of the border. And it’s not uncommon for children who entered the country illegally with their parents to grow up in the Rio Grande Valley to stay home when classmates go on field trips along those roadways to San Antonio.

Vargas, a native of the Philippines, had flown to McAllen last Thursday to take part in a vigil. In an essay he wrote for Politico on Friday, Vargas said he has travelled in the U.S. for years without a problem but didn’t realize that immigration checks are done on those driving or flying out of the Rio Grande Valley in South Texas. Vargas noted that he doesn’t have any government-issued U.S. identification.

His last tweet Tuesday morning was a photograph of his Philippines passport and a palm-size copy of the U.S. Constitution.

Vargas went public about his immigration status in a 2011 piece for the New York Times Magazine. He was part of a team of reporters at the Washington Post that won a Pulitzer Prize in 2008. He also directed a documentary called “Documented,” and founded the activist group “Define American.”