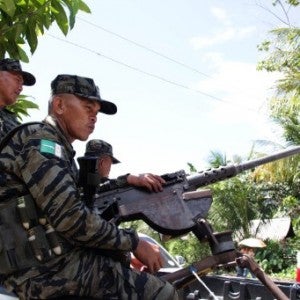 In a statement, the Brunei Royal Armed Forces said the visit was part of the commander’s introductory visit. Accompanying General Abdullah in his visit were Commissioner Dato Seri Pahlawan Awg Bahrin Md Noor, commissioner of Royal Brunei Police Forces (RBFP) as well as senior officers from both the RBAF and RBPF.

Abdullah said the visit was aimed at enhancing defense cooperation in existing fields and to strengthen relations between both nations.

Brunei Darussalam has been a long-time partner of the Philippines in seeking peace in troubled Mindanao region.

It also extended various forms of peace and development assistance in Muslim Mindanao region, including the Grand Mosque in Cotabato City, which was a “gift” from Sultan Bolkiah of Brunei.

After military honors, the Brunei military delegation proceeded to tour the Grand Mosque in the outskirts of Cotabato City.

Brunei has about a dozen police and military personnel serving in the IMT, which is led by Malaysian military.

Deployed in 2003, the Brunei and Malaysian unarmed military and police personnel have greatly helped in preventing skirmishes between Moro rebels and government forces.