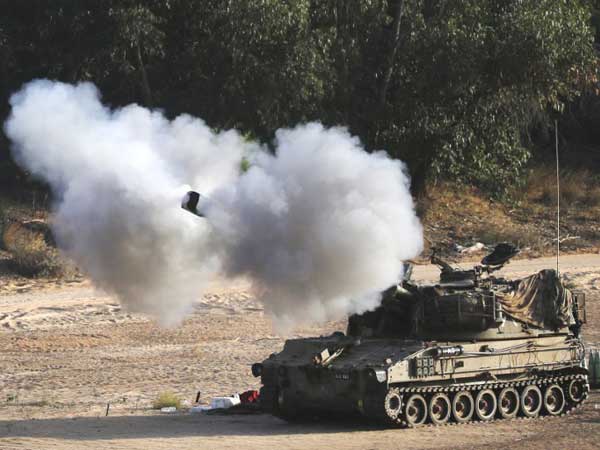 An Israeli tank, positioned near the Israeli border with the Gaza Strip, fires a 155mm projectile towards targets in the Palestinian enclave on July 14, 2014. Israel kept up its punishing raids on Gaza today, but held off from a threatened ground incursion as the world intensified efforts to broker a truce. AFP

MANILA, Philippines – Three Filipino families in the Gaza Strip in Israel have asked for repatriation from the Department of Foreign Affairs (DFA) while there have been no reports of Filipino casualties in the strife-torn country.

“Three families composed of 11 individuals from Gaza have already expressed the intention to be repatriated. Our embassy in Tel Aviv is tasked to move them out of Gaza while our embassy in Amman will receive them and facilitate their transit before they return to the Philippines,” DFA spokesman Charles Jose said during a press conference Monday.

“Our embassies in Cairo and Tel Aviv are actively monitoring the condition of the Filipinos in Gaza Strip and West Bank. So far, we have not received reports of Filipinos harmed or killed as a result of conflict in those areas,” he said.

DFA previously raised crisis alert level 3 in Israel and Gaza due to the escalating conflict between Islamic militant group Hamas and the Israeli government.

Bombings by the Israeli government over the past several days have resulted in over 160 casualties causing thousands of Palestinian residents fleeing from their homes.

WHO official: New number of COVID-19 cases in PH ‘kind of stabilized, a bit’