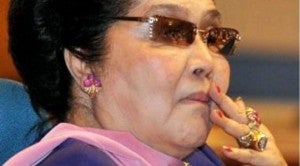 NEW YORK, New York — There she was, an imeldific Imelda beaming amidst smiling students, an honored guest recently of the Ateneo Scholarship Foundation, an appearance that generated outrage from several quarters, including many alumni. As a consequence, the university president, Jose Ramon Villarin, SJ, apologized, saying that he was sorry “for the pain that this event may have caused” and that the Ateneo would “never forget the Martial Law years of oppression and injustice presided over by Ferdinand Marcos.”

But if never forgetting is the aim, then surely having Imelda as an honored guest is a brilliant, foolproof way, a strategy for which I applaud the Ateneo. Villarin need not have apologized. With her in your face, her life the subject of a David Byrne poperetta that’s drawing crowds to the Public Theater in New York, people clamoring for her autograph, how can she fade from memory? Can anyone argue that Imelda does not deserve full credit for her inimitable role in the martial-law enterprise that introduced the Filipino/a as a cog in the global economy, elevated cronyism to a superlative art, expanded the civil and political rights of a military once confined to the barracks, and oversaw a state apparatus that adopted ingenious approaches to human rights in the name of law and order? Clearly, Imelda fits the Jesuit ideal of being a person for others—other relatives, other friends, and all others who saw her as a paragon of civic virtue as well as a source of employment.

However, such a strategy—“Jesuitical” describes it perfectly—is not for the faint of heart. It must be followed through. While Villarin and company are at it, why not place photos of our modern version of the Catholic kings Ferdinand and Isabela in the hallways and classrooms of Loyola Heights, with accompanying captions that detail their twenty-year tenure in public office? That way, the students will never, ever forget.

In addition, the university should have an exhibition space for photos, with accompanying captions as well, of those Atenistas, who had a vision of Philippine society very different from that espoused by the Marcoses. Photos and brief life stories of, for instance, Emmanuel Lacaba, Edgar Jopson, and Evelio Javier, all of whom died resisting the spell of the Marcoses. Photos of Pete Lacaba, older brother of Eman (as Eman was wont to spell his nickname) and the late poet Alfrredo Navarro Salanga, political prisoners schooled by a solicitous military to behave. How about photos of Ninoy Aquino, particularly of his battered and bloodied body, and the instructive tale of his challenge to the would-be monarchs? Such a powerful contrast with shots of a bejeweled and perfumed Imelda and Ferdinand at a state dinner, for instance, would offer a splendid educational opportunity for all those innocent of what transpired in those days.

This exhibition space should also contain photos of Ateneo administrators and professors, such as that of the president and rector during the martial law years, Fr. Jose Cruz, known to be not only a sympathizer of the regime but close to the Marcos family. Photos of then faculty members Bienvenido Lumbera, Dante Simbulan, and Rolando Tinio. For wall text, excerpts from a wide-ranging interview with Mary Hollnsteiner Racelis, still on faculty at the Ateneo, would enlighten its viewers as to the photos’ backstory (and the backstabbing). As documented in an interview printed in University Traditions: The Social Science Interviews, edited by Ramon Sunico and published by Ateneo’s Office of Mission and Identity in 2010, Racelis speaks her mind and dares to bite the hand that feeds her: “There was no question in my mind that Fr. Cruz did not want to challenge the existing political order,” that “in fact, the students and to a lesser extent, the faculty, were much more courageous and demanding.”

As for those pesky well-respected professors, Lumbera (now a National Artist) and Simbulan, espousing, gasp, radical left-wing views, clearly failed to see the benevolence of near-absolute monarchical rule, and got the boot. Tinio resigned in solidarity with the two. Cruz and the Ateneo, acting in loco parentis (no, it doesn’t mean “like some crazy parent”) naturally only had the students’ best interests at heart, cognizant of how corrosive freedom of speech can be on impressionable minds. But Professor Racelis gives us pause, with regard to the ouster of the professors: “The administration used language that made it all seem legitimate but many of us in the faculty, including a number of Jesuits, felt it was outright persecution. … the Ateneo was taking the side of an oppressive government.”

In this exhibition a truly interesting and unusual addition would be a picture of Van Cliburn being given an honorary doctorate in humane letters in 1974 by the Ateneo. This makes perfect sense of course since the Ateneo is known for its quirky ways. Of doing the unexpected. Besides, the concert pianist was quite photogenic; no blood on his visage! Perfect counterpoint to that of Aquino’s, and another learning opportunity!

Racelis, our commentator, provides us with the faultless wisdom behind this accolade. Imelda had promised five million pesos for the scholarship fund (“five million pieces of silver” is the perverse way Racelis puts it) in the 1970s, plus proceeds from the Van Cliburn concerts at the CCP, if the Ateneo would award him this honorary degree. She goes on: “When the matter reached the board [of trustees] I objected as did the other trustees. … I felt that yet again we were bowing to Malacañang and Mrs. Marcos. How could Ateneans hold up our heads in fighting against the dictatorship if we were so chummy with Imelda and Ferdie?”

Poor Professor Racelis! How could she not recognize the reverse psychology and forward thinking of the Ateneo, preparing for the day when the Marcoses could claim not a second but a third act (their current political posts constituting the second act), for that uniquely Filipino habit of not just repeating but wallowing in history, and turning the other cheek, and turning the other cheek, and turning the other cheek? An exemplary nation of infinite Christian fortitude and martyrdom, ever eager for crucifixions! And so it is only proper that the Ateneo, as a bastion of Catholic virtue, set the example of forbearance, as it has done so gloriously since its 1859 inception, during the progressive days, alas, long gone, of enlightened Spanish rule.

ADVERTISEMENT
Read Next
LeBron’s message for Global Filipinos: It’s all about getting home
EDITORS' PICK
PH COVID-19 cases near 19K mark, as recoveries breach 4,000
Leveling up your ‘lutong bahay’ with the kitchen companion you never knew you needed
South Korea clamps down again as virus rebounds
San Juan City to launch pop-up bike lanes
Cherry Mobile teams up with Cloud Panda PH, launches online store
PH walks back, suspends VFA termination ‘upon the President’s instruction’
MOST READ
PH walks back, suspends VFA termination ‘upon the President’s instruction’
Calida ‘just the lawyer, not the client’ and must ‘never lose his cool’ – Macalintal
Over 30 health workers felled or sickened by COVID-19 got no aid from ‘Bayanihan’ Act
7 members of nurse’s family in Laguna catch COVID-19
Don't miss out on the latest news and information.