LeBron’s message for Global Filipinos: It’s all about getting home 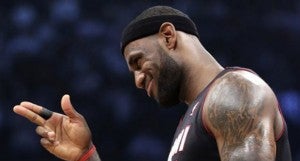 The world is deep, complex and serious. And news by its nature, is never really “good.”

To balance all that, we have sports.

When it comes to the fun and games department in life, good news really is good news.

Sports is our release and our proxy. For example, the World Cup, that free-flowing game of beauty, ends its hold on all of life this weekend. It has been a release for hundreds of millions citizens of the world.  It’s nationalistic, so it easily becomes a stand-in for the more complicated issues of the day, the kind that lead to war. It also serves as the glimmer of hope for small countries that want to compete against the bigger ones. Asian and African countries can indeed go toe-to- toe with the Europeans and the teams from the Americas.

But a funny thing happened as I was going to write about Argentina and Germany, and the battle between the German machine and the cult of Messi.

It all got big-footed by another gigantic sports figure, who really has the world talking.

He even plays a sport that the Philippines actually cares about—basketball.

LeBron James, aka King James has spoken: He has decided to leave the warm beaches of Miami for the frigid lakefront of Cleveland.

You didn’t think he’d come to the PBL did you?

And that’s the point. James’ move restores some of those lost basic values that are at the heart of sports.

It shouldn’t always be about the money, although that’s the way it seems most of the time with millionaire owners and players, left and right. Professional athletes are the best in the world, but too often I find it a turnoff when sport is merely a capitalist tool and play toy of the rich owners and their athlete pets.

But jock entertainment as a part of our global culture should be more than that.

More than championships, it should be about hard work, competition, sportsmanship.

Sure. But if you’re like me and think that lost in the mix of multimillion dollar free agency has been a loss of soul, well, now we have LeBron to thank for making sports about something more.

You might have noticed in all the reporting of the LeBron move, hardly anyone mentioned money. No doubt Cleveland will compensate LeBron well.

But the story was really all about that one word—home.

If you’ve ever been to Cleveland, a town that is mired in a past of American manufacturing greatness but is great no longer, you understand why people want to leave it.

If you had a choice between Tondo or anyplace else, where would you go?

Cleveland is the opposite of James’ current home, Miami, in every way. In Cleveland, the glitz is rusted. The shine is gone.

When LeBron James left the city of Cleveland for Miami, it was a big deal. And a slap.

But now he reverses course and goes home. And it just seems right.

James, a native of Akron, says times have changed.

In an essay for SI.com, James wrote:

James continued: “I always believed that I’d return to Cleveland and finish my career there. I just didn’t know when. After the season, free agency wasn’t even a thought. But I have two boys and my wife, Savannah, is pregnant with a girl. I started thinking about what it would be like to raise my family in my hometown. I looked at other teams, but I wasn’t going to leave Miami for anywhere except Cleveland. The more time passed, the more it felt right. This is what makes me happy.

You can hear it in his note. In this sports story, it’s not about winning or money.

This is about what a star player means to his home, and vice versa.

It’s about winning for an entire community in all ways.

“I feel my calling here goes above basketball. I have a responsibility to lead, in more ways than one, and I take that very seriously. My presence can make a difference in Miami, but I think it can mean more where I’m from. I want kids in Northeast Ohio, like the hundreds of Akron third-graders I sponsor through my foundation, to realize that there’s no better place to grow up. Maybe some of them will come home after college and start a family or open a business. That would make me smile. Our community, which has struggled so much, needs all the talent it can get.”

“In Northeast Ohio, nothing is given. Everything is earned. You work for what you have.”

Filipinos in all of the diaspora know this heart tug.

Filipinos who have immigrated freely and have made it in America feel it too.

At the core, is what every Filipino not in the Philippines feels.

There will be a time, when one must simply look homeward. To help, to nurture, to build, to make great.

Sometimes the clarity of that cannot be seen in the complexities of what’s before us, but indirectly in the simple games we play and watch in sports.

It’s the object in all the best games.

In baseball, you win by scoring more runs than the other team. You score by touching home.

And that’s the way it is in life too.

@KingJames shows us why he’s king, by pointing to where the real values reside in sports.

Read Next
Most OFWs in Libya ignore calls to come home
EDITORS' PICK
DOH warns vs eating raw meat, exotic animals amid coronavirus outbreak
Get exciting deals and discounts when you download the new McDonald’s App
4 Ways Jollibee’s new store will serve a leveled-up kind of joy to Filipinos in the South
SM continues to send relief assistance to remote towns in Batangas
‘House of Kobe’ launched in Valenzuela City hours before hoops star’s death
In appreciation: Kobe Bryant, a life defined by hard work
MOST READ
Kobe Bryant’s helicopter flew in fog that grounded other choppers
College baseball coach, wife and daughter die in crash that killed Kobe
China virus toll spikes despite massive lockdown
Wuhan nurse shaves head to aid her work against virus
Don't miss out on the latest news and information.