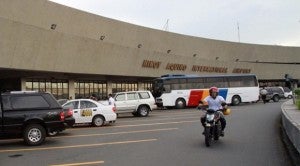 A group of overseas recruiters has expressed opposition to the plan of airport authorities to include the terminal fee in the price of all airline tickets starting October. INQUIRER FILE PHOTO

MANILA, Philippines–A group of overseas recruiters has expressed opposition to the plan of airport authorities to include the terminal fee in the price of all airline tickets starting October.

The move is aimed at removing the last-minute long queues at the airports for terminal fee payments and was formalized in an agreement between the Manila International Airport Authority (Miaa) and various airlines on Tuesday.

But the Federated Association of Manpower Exporters (FAME) is not happy about it, pointing out that overseas Filipino workers, who are exempted from the fee, would face an additional process of refunding the fee.

The integration agreement specifies that those exempted from paying terminal fees must submit an exemption certificate for tickets purchased from ticketing offices and travel agents within the Philippines. If tickets are purchased online or outside the Philippines, the terminal fee will be refunded in Manila upon presentation of the exemption certificate.

In a statement on Wednesday, FAME president Alfredo Palmiery said the process of refunding the fee would create another queue and become an “additional burden” to exempted OFWs. The terminal fee is also waived for national athletes and Muslims going on pilgrimage.

“It will just become an additional burden to the workers, the recruitment agencies and the employers themselves,” the statement said.

Many OFWs queue up at POEA labor assistance centers at the airports to get their OEC clearances.

The group said around 4,000 OFWs leave through the airports every day.

He explained further that the recruitment companies were the ones paying for the electronic tickets of OFWs, thus increasing the cost of recruitment expenses.

The memorandum of agreement integrating the terminal fee in the cost of the airline tickets was signed by airport officials and representatives of air carriers plying international routes in formal ceremonies on Tuesday.

The terminal fee has been a bone of contention because its collection gives already harassed travelers one more line and procedure to endure before a trip.

The MIAA has given the air carriers three months from July 1 to reconfigure their systems and adjust to the fee integration. A one-year transition period from October this year to October next year has been set in order to collect the fee from passengers who had bought their tickets well in advance.

By October next year, all terminal fee counters will be gone, Miaa General Manager Angel A. Honrado said.

“Queuing will be a thing of the past,” he added, stressing the new system would reduce travel processing time.

Under the agreement, the Miaa will pay the airlines a service charge of 3.5 percent per fee of P550 collected.

Honrado estimated the Miaa will pay out P150 million a year to all the 34 airlines operating out of Naia. But the government will save roughly P50 million from doing away with the collection counters.

The airport authority will forgo around P100 million, he said.