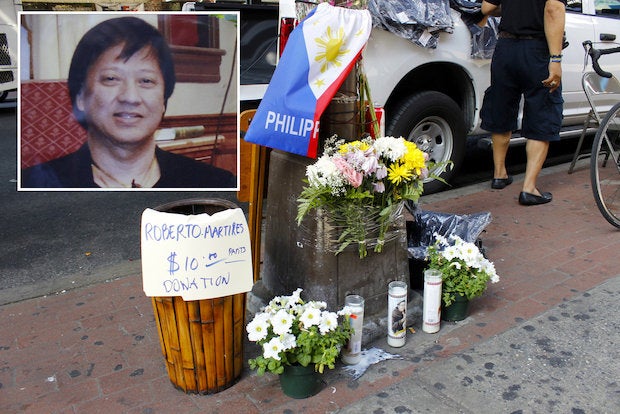 • Still no arrests in the killing of Roberto Martirez in Queens, New York

• Some Filipinos skeptical of link to World Cup revelry

NEW YORK — More than a week since 56-year-old Roberto Martirez was fatally attacked outside a restaurant in Queens, NY, police appear to have made little progress in the search for the suspect seen in a grainy image captured in surveillance footage. (Previous reports misspelled his surname as “Martines.”)

While the investigation is ongoing, no arrests have been made and no one has come forward to give police new leads, prompting New York City Police Department to seek help from the public and collaborate with the Philippine Consulate.

Police Officer Sophia Mason, responding to an INQUIRER.net e-mail inquiry on Monday afternoon, said that the “Police Department is asking for the public’s assistance in ascertaining the whereabouts of an individual wanted for questioning.”

The authorities have returned to the crime scene this week and posted flyers around Woodside, a neighborhood with a significant Filipino immigrant population, offering a $2,000 reward for information that may lead to the arrest of an individual responsible for the assault on Martirez, a chauffeur who lived a few blocks from the restaurant.

According to initial police reports, the suspect was described as a “Hispanic male, early to mid-20s, with facial hair,” and was last seen on the security camera wearing a white T-shirt, blue jeans and a dark-colored baseball cap.

On Saturday, June 28, the Philippine Consulate in New York issued an advisory appealing to Filipinos and others who may have witnessed the incident and have information that could help track down the suspect. 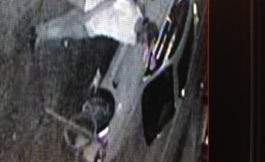 “Toward this end, members of the public who are witnesses to or have significant information regarding this incident are encouraged to step forward and extend cooperation with law enforcement authorities,” New York Consul General Mario de Leon, Jr. appealed in a statement.

De Leon assured that the information given, as well as the identity and personal safety of the person who may provide leads on the suspect and bring “a speedy administration of justice” to the victim and his family, would be treated with utmost confidentiality.

Not a hate crime

Despite testimonies given to investigators that Martirez was asked if he was Filipino before he was assaulted, NYPD has ruled out the possibility of a hate crime. Instead, authorities believe the attack on Martirez was a result of a fight after a World Cup soccer match.

Shortly after midnight, on June 22, sources say that Martirez and his uncle left Krystal’s Café and Pastry Shop, a Filipino restaurant on the corner of 69th Street and Roosevelt Avenue.

While on the sidewalk outside the eatery, an unidentified man came up to Martirez and reportedly asked him if he was Filipino. When he responded that he was, sources added, the suspect punched him in the face.

Martirez, a father of two sons, fell and hit his head on the pavement. He died three days later at Elmhurst General Hospital from his injuries.

But other witnesses, including a Filipino vendor who sells balut a few yards from the site of the attack, said that the “Filipino” question was never asked and that there was no indication whether the two had a brief conversation.

“It looks like it [was] revelry after the World Cup,” NY Chief of Detectives Robert Boyce was quoted in a New York Daily News report, adding that it was likely “a fight there after.”

On the day of the incident, the World Cup matches featured Italy against Costa Rica, France defeated Switzerland, and Ecuador won over Honduras.

Some Filipinos, like Marian Gutierrez, say that pointing to World Cup revelry as the trigger of the brutal attack on Martirez is ludicrous.

“They [police] make us look like we are stupid. The Philippines is not even part of the World Cup,” said Gutierrez, 51, who knew Martirez , who like him was a regular customer of the restaurant. “They can do better than that.”

When a follow-up inquiry was sent to Officer Mason on why the attack is not being investigated as a hate crime, she did not respond.

Martirez, whose friends fondly remember him as someone who loved to sing at karaoke, worked as a private chauffeur for the granddaughter of the late Benjamin Romualdez, who was a former Philippine Ambassador to the United States and a younger brother of former first lady Imelda Marcos.

Martirez was cremated on June 28.

In Woodside, friends, family members and supporters of Martirez put up a memorial of candles, flowers, a flag of the Philippines and the victim’s photograph and sought donations to raise money for his funeral.