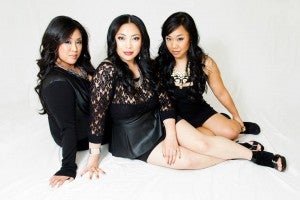 Drawing inspiration from music icons such as Destiny’s Child, EnVogue and Deborah Cox to Mariah Carey, Ariana Grande and Katy Perry, the group has grown up together, performed in a variety of shows, concerts and international stages and released two albums to date, creating a brand — all while individually pursuing a college education.

From an early age, the girls shared similar interests in the performing arts and loved to dance, watch musicals and play the piano.  The group’s official debut might have been in 2000, but they had been singing together long before in a children’s church choir.

The trio grew up singing and never thought they would pursue it farther than singing at church. Today they serve up helpings of R&B, pop, gospel, dance and ballads to adoring fans.

Mei said, “I developed an interest in singing at a very young age because my mom would make me sing when I was a little kid.  At that time, I hated it but have grown to love it.”

They formed immij, which they created using letters out of their names, after realizing similar goals and dreams.

“After we sang at the children’s church choir, we continued to sing together in the youth and adult choirs,” Mei explained. September 2000 was when they decided to take their passion a step further and decided to sing and perform as a group. “It was something we all loved and we wanted to share it with others.”

After three years, immij recorded its first album, a process that took three months while at the same time they were all focused on school as well.

Mei, now a public relations associate, Lyn, a project assistant for the Luna Company, and Kris, the owner of a business, would work late nights to compose original songs and record their tracks.  In 2003 they released their first full-length album, “Destined.”  Three years later, their sophomore album entitled “Fearless,” was released.

“Sometimes we are inspired by a track, life experience or something we just saw and then we write lyrics to it and make our own harmonies and melodies,” Kris stated. “Vice versa, sometimes we have a melody in our head and have someone make a track to it.”

“There isn’t a set process when it comes to our songwriting, but it is always a collaborative effort,” Lyn added. “We talk about what we want the topic to be and sometimes someone will say they have an old poem or lyrics that they want to incorporate, or we will have a little writing session and put together all the pieces.”

Sometimes a producer will lets them listen to a track, and the melody and words will start flowing into a song. “Every song on our albums has our personal stamp on it,” Lyn said.

The group has performed throughout the US and even toured in the Philippines. Lyn stated, “Doing things on our own felt like ‘big breaks/breakthroughs’ in themselves. Booking our first gigs, acquiring a manager, writing and arranging original songs, making our own label immijRecords that we used to release two albums, traveling all around the US and abroad — those all felt like breakthroughs for us, and we continue to work on progressing, regardless of the pace.”

Currently, immij is building up a repertoire and working on some collaborative videos and renditions.  Even with day jobs, the immij ladies still make time to rehearse and get.  When preparing for an event, they focus on what type of event it will be, who their audience is and what the group thinks will the resonate with audience.

“When we hear something we like, we usually bring it up to the group during rehearsals and see how the other girls feel about singing it,” Lyn said. “If it sounds good and we can groove to it, we’ll take a stab at “immijizing” the song to make it our own.”

Immij is also working at building a stronger social media presence to engage a larger audience.  They update their Facebook, Instagram and Twitter to publicize and promote their recordings and upcoming shows.

They can be found on these sites as immijLadies.  Their YouTube channel following is steadily growing as they continue to upload medleys and other music covers.  Their most recent video was a version of a Disney medley.

immij is booking shows throughout the Bay Area. “We’ve talked about working on some new originals and maybe putting together an anniversary show of some sort. We’ll see!” Kris said.

Virus similar to pathogen behind COVID-19 found in Malaysian pangolins