Canadian wants to be Filipino: Just call him Kulas 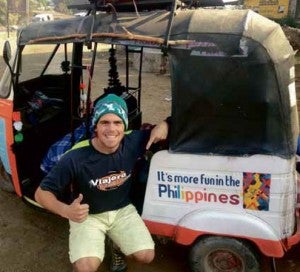 CAGAYAN DE ORO CITY, Philippines—Canadian Kyle Douglas Jennermann is on a mission. The 26-year-old native of Comox, British Columbia, is building a to-do list that, when fulfilled, he hopes would make him become something he is not quite just yet—a Filipino.

The list, posted in his blog www.becomingfilipino.com, is open-ended. Anybody, Filipinos here or abroad, can make suggestions and add to the list, Jennermann says.

“Think of things, experiences, anything that makes you Filipino,” Jennermann writes in his blog. “I will collect all the different ideas,” he says, “then the journey begins.”

Launched in mid-February, the list is growing and Jennermann says he is slowly, day in and day out, ticking things off the list. He has gotten a local name, too, after a friend pointed to him and said “Kulas.”

A scooter bought from a Filipino friend has taken him to places in Mindanao deemed “unsafe” for tourists.

“I have never experienced a culture like the Philippines’,” he says, “a culture that goes through a lot of really tough times and suffering but still shares a great big smile.”

Jennermann first came to the Philippines with four friends in January last year. He had been working in Hong Kong for an outdoor adventure company, which runs camps for children with special needs. The firm has Filipino members in its staff.

Jennermann says he had no Filipino friends in Canada and he got intrigued by how his Filipino colleagues shared everything, from chores to food to beers.

“They were a hardworking bunch, yet they always seemed to be so happy,” he says.

Jennermann says he had already planned a trip to Southeast Asia with friends but decided to swing to the Philippines after being invited by his Filipino coworkers.

“We arrived in Cebu at about 2 in the morning,” he relates. “I was a little anxious, none of us had ever been to the Philippines and I had persuaded some friends to come with me.” 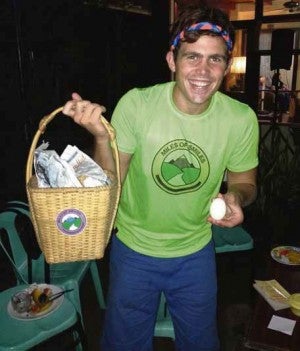 … And tries his hand at selling “balut” while waiting to being Filipino.

As his friends were collecting their luggage from the carousel, Jennermann says he decided to go outside the airport to collect his bearings. He knew no one save for references to friends of friends. Outside, he noticed two men bearing cardboard signs.

“I thought they were beggars at first,” he says. “So I smiled and told them, ‘No, thank you.’”

Jennermann says he was moving away and noticed the two men following. And then he heard them say, “Kyle.”

“That was when I noticed the sign which read ‘Welcome to the Philippines.’”

In that first visit, Jennermann stayed for three weeks, traveling around the cities of Cebu, Cagayan de Oro, Davao and Quezon. He came back in July of last year, after working to finance his wanderlust, to see what it’s like to travel around by himself.

Aware of Mindanao’s supposedly bad reputation as a place unsafe for tourists, Jennermann says the trick is research and a whole lot of common sense.

Having loved the outdoors since his days growing up in Comox, Jennerman says what made him love the Philippines is the natural beauty of its environment—its beaches, waterfalls, mountains and rivers.

He says he has also come to love the culture where strangers are treated like friends and everybody is family.

He was working in Hong Kong in November 2013 when Super Typhoon Yolanda (international name: Haiyan) struck, devastating Tacloban City and other parts of the Visayas. 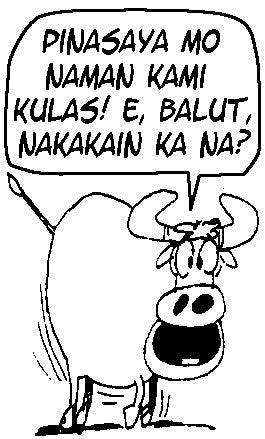 “I was with Filipinos at that time in Hong Kong and seeing the way it affected them, I just wanted to do something,” he says.

He decided to quit his job and flew to Cagayan de Oro where he ended up packing relief at a Red Cross station. Soon after, he ended up in Tacloban about two weeks after the typhoon on a relief mission and also to look up a Hong Kong colleague who was from there.

Together with his Filipino friends from the outdoor community, Jennermann put up OneTacloban to help out in the relief efforts with no “red tape, no politics, no bulls—.”

With his camera, Jennermann started documenting the damage. Afterwards, he would sit outside the United Nations tents—the only places then with Internet signal—and upload his videos on YouTube so friends and family could see how desperately help was needed.

OneTacloban was able to raise some P500,000 in donations, which helped in reopening a school for children, setting up clinics and procuring relief.

Jennermann says this is what his personal project, Becoming Filipino, is all about. He says the different aspects of Filipino culture—always looking out for friends and family, the capacity to live incredibly hard lives yet never losing sight of the positives, these are what he finds special.

“Don’t get me wrong, there are some nasty things here as well. But to see these values in this environment is truly inspiring,” he says.

Jennermann says he wants to share these experiences with friends back home and with other tourists his age.

For now, his greatest fear is being asked to leave. He has twice applied for visa extensions but at about P7,000 per application, these have gotten to be a drain on his resources. Becoming Filipino, in a way, presents a practical solution because if he were to become one then he would legally be able to find work and support himself.

“I looked it up,” he says, referring to the official process of how to apply for Filipino citizenship.

“I need to do business here but I have no money. Or I need to find a Filipino wife. But I have no girlfriend so that won’t work out,” he adds.

Jennermann decided to make Cagayan de Oro his home base because everywhere—beaches, mountains, rivers—is like only an hour away. It is also a “big city but a small community,” where everybody seems to know everyone else.

“Comox is where I’m from, but Cagayan de Oro is my home now,” he says.